Versatility is the Key to Success in Oregon Tunnel Restoration

Fun fact: There are 541 highway tunnels in the US, accounting for more than 381 lane-miles of interstate, state and local routes. The majority of these tunnels are between 60 to 110 years old, and combined they carry more than 15.4 million vehicles on the average day.

Unlike the horizontal surface of a bridge, a tunnel typically has a 360-degree surface of concrete that must be regularly monitored and restored if the structure is to last. One example of this maintenance challenge can be found in Portland, Ore., where the city’s transportation department is putting the finishing touches on a project to restore the concrete ceiling and vertical walls of the Northwest Cornell Road Tunnel. With the repaired surface covering a total area of approximately 28,800 ft2 (2,676 m2), this project illustrates how innovative equipment can be combined with adaptive project execution to maintain the world’s tunnel assets.

The NW Cornell Road Tunnel consists of two tunnels that were constructed between 1939 and 1941 to support residential development in Northwest Portland. Tunnel 1 is 500 ft (152.4 m) long and Tunnel 2 is 250 ft (76.2 m) long, each containing two lanes. Approximately 10,000 vehicles per day use the Cornell Tunnel. After a routine inspection identified a large crack near the crown of Tunnel 1, an in-depth field assessment and subsequent geotechnical engineering report recommended concrete strengthening and re-lining for both tunnels to prevent structural failure and minimize the future permeability of harmful contaminants. The existing concrete was estimated to have an average strength of 5,500 psi (40 MPa) but varied widely depending on the area.

The project was awarded to general contractor MJ Hughes Construction, which subcontracted the task of removing deteriorated concrete to CCS Industrial Services of nearby Longview, Wash. CCS was confident that, using the Conjet Robot 557 MPA, it could outperform other contractors that would attempt to complete the concrete demolition with jackhammers and breakers.

Hydrodemolition is a process that uses high-pressure water to remove concrete or other surface materials. One Conjet robot can remove the same amount of concrete as 25 or more jackhammers. Hydrodemolition is also safer than competing technologies; operators are not exposed to silica dust or vibrations that are present with jackhammers and roto millers, and they can stand a safe distance away from the robot as it operates.

And, hydrodemolition is the most sustainable method for structural preservation, as it does not create microcracks in the remaining concrete, pull-off tests show that a hydrodemolition-prepared surface forms a 2.5x stronger bond with the new concrete overlay compared to the same surface that has been prepared with a jackhammer. This extends the structure’s useful life and reduces concrete consumption. In addition, hydrodemolition preserves and cleans the rebar reinforcement whereas jackhammering and roto milling damage the rebar and require significant replacement.

Another benefit of the Conjet 557 robot would be its Multipurpose Arm (MPA), which allowed CCS to quickly and easily relocate the robot’s cutting head to remove concrete from different angles and reaches on the overhead crown and vertical sidewalls.

Construction Begins, But Unknown Conditions Cause Plans to Change

Sitework began in September 2021. Tunnel 1’s project specifications called for a 14 ft wide x 2 in deep (4.3 m x 5.1 cm) strip to be removed at its crown for the entire length of 500 feet (152.4 m). The removed concrete would be replaced with Shotcrete to seal and preserve the Tunnel’s rebar reinforcement beneath the surface.

Tunnel 2 had experienced more severe deterioration than Tunnel 1 over the years. As a result, the project engineers initially planned to use hydrodemolition to cut 12 in wide x 12 in deep (30 cm x 30 cm) ribs every 7 feet for increased structural stability. In addition, the plan called for the top 2 inches of the entire overhead area and vertical walls, totaling 14,000 ft2 (1,300 m2) to be removed and replaced with new concrete.

Finally, in Tunnel 2 a new mat of #3 rebar would be added to the entire removed surface area, covered with mesh, and filled with Shotcrete. The #3 rebar mat would create a new reinforcement system to replace the original rebar which was damaged by the concrete deterioration and resulting permeability.

CCS quickly mobilized its equipment and began removing the concrete. Tunnel 1 demolition operations went quickly and according to plan.

As CCS began removing concrete on Tunnel 2, however some unexpected challenges arose. It was discovered that not only was the concrete extremely deteriorated, the thickness was also very inconsistent, ranging anywhere from 8 to 24 inches (20-61 cm) depending on the location. As a result, the original plan to cut 12 inches (30 cm) deep and place new concrete to form structural ribs had to be abandoned.

Rather than installing ribs, the city’s engineering team decided to pivot to a new structural strengthening approach that involved cutting thicker, 6 in deep x 100 ft long (15 cm x 30 m) panel sections. Each panel section would have a reinforcing mat of high-strength #6 rebar. To maintain structural integrity while during this process, each panel section would need to be cut to the proper depth, replaced with rebar and concrete, and cured before work could begin on the next section.

CCS got to work executing the new project specifications for concrete removal. Using the ConjetONE control system, CCS was able to easily adjust the parameters of the 557 MPA to cut at different speeds across the cutting head, ensuring a 6-in (15 cm) deep removal, even across the curved crown of the Tunnel. The MJ Hughes team then came back in and installed new rebar and mesh, filling in the new reinforcement system with Shotcrete. The revised construction plan was executed successfully, and the concrete repairs were completed in April 2022. The Cornell Tunnel restoration project is a great example of how skilled contractors and engineers can deploy cutting-edge hydrodemolition equipment to preserve vital concrete infrastructure, regardless of the unexpected challenges that may arise in the process. 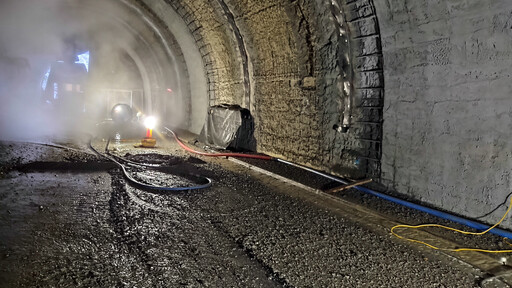 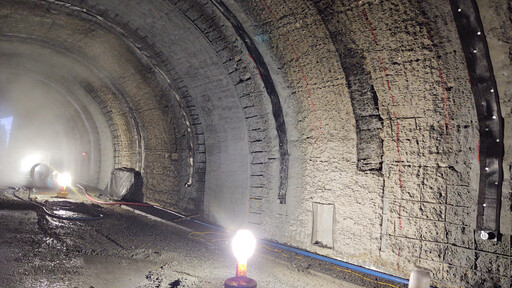 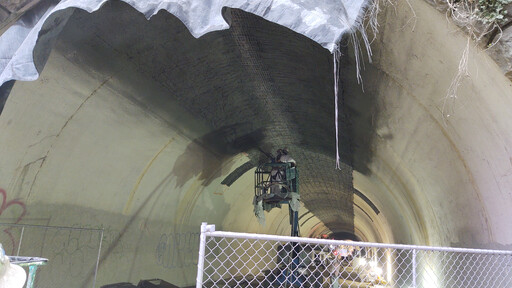