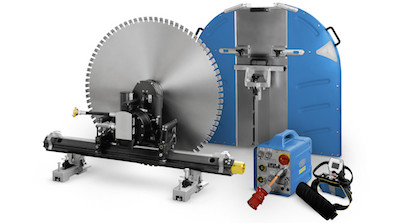 With the introduction of the WSE1621 wall saw system, TYROLIT proves once again that you do not have to compromise on performance and weight. On the contrary, completely redesigned premium wall saw system sets new standards in its class with its ultra-compact and especially lightweight system components as well as many digital equipment features.

Virtually all day-to-day tasks can be mastered easily, with a maximum depth of cut of 27.75 in (705mm) and a blade diameter of 63 in (1,600mm). Other features include a 23-hp (17kW) water-cooled motor, a handy remote control with color display, and innovative communication interfaces.

The WSE1621 combines an especially high performance with compact dimensions and a previously unrealisable weight for its class. All components have been redesigned from scratch and uncompromisingly configured for an optimal weight/performance ratio. For example, the saw head and the ultra-compact motor, which has a tool-free quick-release feature, only weigh approximately 35 kg. The construction of the WSE1621, in conjunction with the newly developed, especially lightweight blade guard, makes using it almost child’s play.

The new wall saw system is completed by a control unit that has been reduced to the size of a doctor's case and it has state-of-the-art communication interfaces. The bright colour display also provides the operator with details about all relevant information that is needed before, during and after the cutting process.

Tyrolit also relies on the revolutionary P2® drive concept for the latest member of its wall saw family, which stands for consistently high performance and maximum reliability with significantly reduced service costs. This modular system, enabling system-independent use of individual components within different applications, has also been successfully integrated. For example, the convenient controller and the compact main motor are also suitable for wire sawing and drilling in addition to wall sawing.