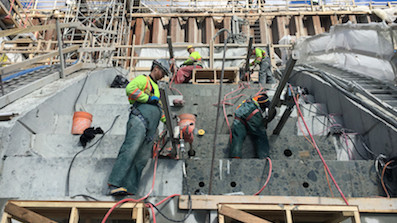 This was a concrete sawing and drilling job of epic proportions—20 million lb (9 million kg) cut and removed above and below water, 5,000 holes cored to depths up to 39.4 ft (12m), and approximately 7,500 ft2 (697 m2) of surface scarified—completed in phases over a three-year period.

The site was Ruskin Dam, a 361 ft (110m) long, 193.6 ft (59m) tall concrete gravity dam structure in Mission, British Columbia. Built in the 1930s, the dam’s ogee-type spillway consists of seven radial gates. An adjacent powerhouse, accessible by a truss bridge from offices on the west side of the river, contains three 35-megawatt turbine-generators.

A US$625-million seismic upgrade project, begun in 2012, would also improve the reliability and efficiency of the electrical generation system with the installation of new equipment. Other project elements adding a new two-lane road and pedestrian walkway over the dam, and restoration of the powerhouse’s heritage.

In 2015, Coast Cutting & Coring Ltd., a division of Westcoast Cutting & Coring Group Ltd. based in New Westminster, BC, was awarded the concrete sawing and drilling work. Tasks included cutting and removal of four existing piers, the bridge deck, and sections of the spillway; cutting free old generators, intakes, gate slots, and draft tubes; and creating new steps on the spillway for pier forms. In addition, deep hole drilling was specified for the installation of seismic anchoring and the spillway surface required scarifying for reinstatement.

A priority on planning
A number of factors complicated this job. A large portion of the work was done on the face of the dam spillway, which was on a 60-degree slope with limited access. In addition, the project’s general contractors specified a 1-inch tolerance for the form work. And, the reservoir below the work area contained salmon that were spawning, making protection of wildlife and water within the reservoir a critical planning consideration.

Cutting of the dam structure and powerhouse was performed simultaneously, with 30 operators working six days a week in alternating shifts during each phase of the work. Tasks on the dam section started with slab sawing and removal of the 19.7 ft (6m) wide concrete bridge deck. Holes cored through the deck allowed steel shafts from the old gates to be cut free. Lengths of concrete railings were braced with knee braces and cut for removal. Deck pieces were slab-sawed between the bridge beams with a Husqvarna 4800D, leaving three bridge beams in place. At this point, wire saws were positioned on both sides of the beams to cut them free. The beams were supported, then removed one at a time by crane.

Slots cut into the dam intakes for new gates measured approximately 59 ft (18m) tall and 26.2 ft (8m) wide. These gates allow intake water flows to be stopped for generator maintenance. The lintel beam and sill beam were cut and then chipped out to save existing reinforcement for structural tie-ins. Concrete was cut with Husqvarna hi-cycle hand saws, while the chipping was performed with a Husqvarna DXR310 demolition robot.

Coast Cutting & Coring then cut four free-standing piers, three of which were 39.7 ft (12m) square and 6.7 ft (2m). The piers were divided into 48 pieces, each weighing approximately 35,000 lb (15,876kg). One of the piers, poured against a rock face, was approximately one-third larger than the others. This pier was cut into 58 pieces. Scaffold and platforms were set up for access to one side of this pier, and a narrow hanging platform positioned on opposite side to provide access for slurry containment and wire access.

Operators cored 2-in (5cm) diameter holes through the piers for wire access. The contractor employed two Hilti DSW 3018 wire saws and manipulated the wire to perform two cuts at the same time, either horizontally or vertically or opposite directions, to increase productivity and schedule. Cut pieces were lifted out by a 275t crane set up on a floating barge nearby. The crane placed the pieces onto an adjacent barge as the work area was too far from shore, and when the barge was full it transported the concrete to shore to be removed from site and recycled. Sections of scaffold were taken down after two rows were completely cut, and this process was repeated seven more times.

The final pier removed was the larger structure that was poured against the rock face. Having no access to the backside of the pier, the contractor made a grid pattern of 39.4-ft (12m) deep intersecting core holes use Weka SR68 drills. This allowed sections to be cut free with a wire saw. As each cut intersected with another, holes had to be cored from front face to intersect and the pier was cut into 58 pieces.

With the project reducing the name of dam gates from seven to five, new steps were cut in the 60-degree sloped dam wall for the installation of new steel formwork. A combination of wall sawing and wire sawing was performed using a Husqvarna WS 482 wall saw, a Pentruder 8-20 wall saw, and the company’s Hilti DSW3018 wire saw. Operators started at the top and bottom of the spillway simultaneously because the schedule only allowed 17 days to complete this task. The 14.8 ft (4.5m) wide steps began with a 17.7-in (45cm) high, 60 cm deep pattern, and gradually increased to 50 in (127cm) high by 35.4 in (90cm).

From the top, the steps were cut vertically down by custom blades from Cyclone Diamond Products and powered by the Pentruder wall saw. Corners were finished by CW630 chain saws from ICS, but also core drilled vertically and horizontally to create wire access holes to finish the end cuts. Working from the bottom required a different strategy because of the step’s depth. A series of 7.1-in (18cm) holes cored vertically down past the required depth of the step allowed operators to push the wire down using pulleys rather than pulling it. As work continued, two more crews began working from the top and bottom of the wall, coring pilot holes vertically and horizontally. This allowed a rock drilling contractor tp create openings for dowel installations that would anchor the new piers to the bedrock.

Coast Cutting & Coring was also asked to remove 6 in (15cm) off the surface of the spillway and create a rough surface. Water blasting was used for a portion of this task, but was time-consuming process led to the use of diamond cutting tools. The area was a 39.4-ft (12m) square that was wall cut into 16 smaller 9.8-ft (3m) square panels.

As wall sawing of the panels progressed, a wire saw crew placed diamond wire into the cuts and performed pull cuts to achieve the new surface profile. Each piece took about two to three hours to complete. After each row of four pieces were lifted out, a Husqvarna DXR310 demolition robot fitted with a milling head scarified the surface so that new concrete could be poured onto it. This task was particularly successful and the contractor finished a full three weeks ahead of schedule.

But wait, there’s more…
In addition to the large amount of work completed on the dam spillway, work at the nearby powerhouse required cutting a 29.5-ft (9m) diameter steel pipe, dissection of a stator into six pieces, removal of numerous concrete bases, a creation of 5x24.6 ft (1.5 x 7.5 m) openings between the three levels of the powerhouse to aid in the cooling of the new dam generators.

On the reservoir side of the dam, underwater wall sawing techniques were employed to cut slots for the coffer dam. A Husqvarna WS 360 hydraulic wall saw fitted with a 24-in (61cm) blade made the required cuts. Each slot took seven days to complete with a crew working 12-hour shifts.

Over the three-year period of the Ruskin dam spillway and powerhouse job, Coast Cutting & Coring Ltd. helped the general contractor remove 10 million tons of concrete. To complete the sawing and core drilling tasks safely on the 60-degree slope of the dam wall, specialized work platforms were erected and all workers were fitted with harnesses and fall arrest equipment.

To make sure the salmon living in the dam reservoir remained healthy and unharmed during the work, a three-tier slurry containment system was employed. On every scaffold platform, a rubber membrane was installed and slurry pumped into totes. From there, the slurry was pumped across to the other side of the dam where it was processed. Shrink wrap was used around the scaffold decks to prevent any overspray containing the slurry and two gutter systems were installed to capture any that escaped.

“Our work at Ruskin Dam was arguably the most challenging project we have ever done—it certainly had the most demanding schedule,” says Dario Babic, a partner with Coast Cutting & Coring Ltd. “We believe this was the largest concrete sawing and core drilling project in Canada in terms of volume. We worked six days a week with alternating shifts on an open platform, sometimes in snow and icy conditions, and had to be extremely careful when it came to the control and containment of slurry.”

Babic adds that the work was completed ahead of schedule and within budget, and additional phases were awarded based on the success of original contract.

“Most importantly, we left the jobsite with zero lost time incidents,” he says. This was possibly the most satisfying part about the whole job.”

The upgrade and reinforcement work at Ruskin Dam was completed September 2017.

Photo 2: Photo 2
Caption: Concrete sawing and drilling work involved the cutting and removal of four existing piers, the bridge deck and sections of the spillway.

Photo 3: Photo 3
Caption: Wire sawing techniques were used to cut sections of the dam wall into blocks for removal.

Photo 4: Photo 4
Caption: New steps were cut in the 60-degree sloped dam wall for the installation of new steel formwork.

Photo 5: Photo 5
Caption: Operators started at the top and bottom of the spillway simultaneously to complete the task on schedule.

Photo 6: Photo 6
Caption: Cut sections were removed by crane and placed on a nearby floating barge.