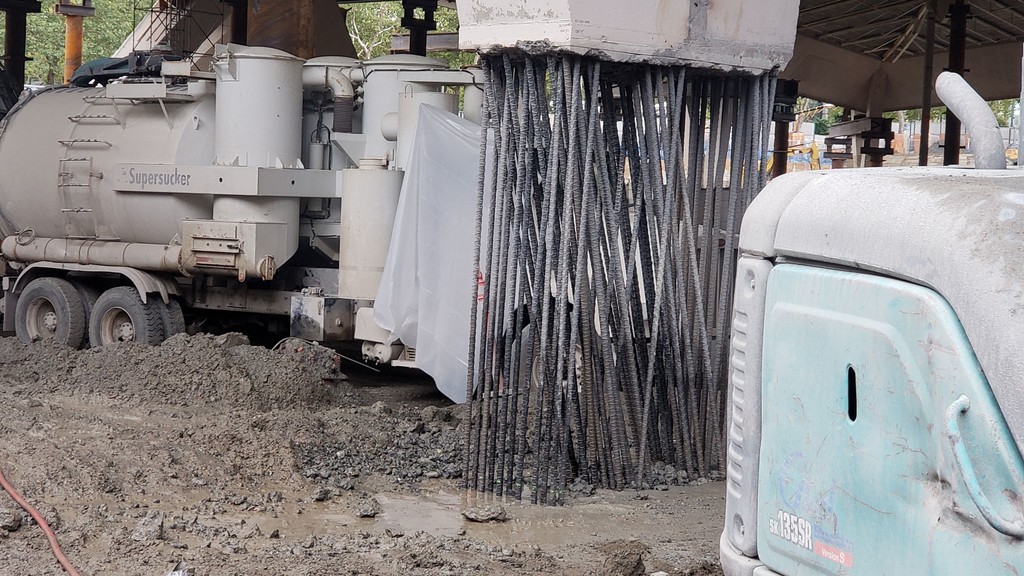 How Hydrodemolition Played Part in the Renovation of Climate Pledge Arena

One of Seattle’s most well-known buildings – the Climate Pledge Arena – is in the middle of a monumental renovation, one that will more than double the square footage of the building. The venue, formerly known as Key Arena, will be fully renovated and reopened by the end of 2021. The ambitious project officially began in the fall of 2019 and has since been the stage for some unique engineering and demolition methods, including the use of Aquajet Hydrodemolition robots. Contractor Redi Services played a key role in the renovation process by bringing this innovative equipment to the jobsite. Expanding a building downward avoids the mess that comes with a traditional horizontal expansion – redesigning a city structure and demolishing surrounding buildings. But the unique approach didn’t actually stem from those concerns. Instead, the inspiration came from a desire and mandate to preserve the building’s roof. Designed by architect Paul Thiry for the 1962 World’s Fair, the easily identifiable sloped roof received historic landmark status for its original use in a historic cultural event. The landmark designation requires that any modification to the building preserve elements of the historic structure.

Since the renovation process was under a microscope, every aspect of the process underwent additional planning and inspection. The downward expansion – which will take the size from 368,000 ft2 (34,188 m2) to roughly 800,000 ft2 (74,322 m2) – presented a variety of logistical challenges. Crews dug an additional 15 ft (4.6m) below the current arena floor, about 60 ft (18.3m) below street level. While accomplishing that feat, there was one small concern – how to hold up the 44-million lb (20-million kg) roof.

The engineers and contractors, including M.A. Mortenson Co. and subcontractor Rhine Demolition, developed an intricate plan—install a support system to hold up the roof while they demolished the current columns and buttresses, and then rely on the supports for several months to allow for installation of the new support system. It seems daunting, but with a well-thought-out approach and step-by-step execution, they made it happen. After first excavating downward and removing roughly 600,000 yd3 (458,733 m3) of soil, crews drilled new foundation supports. This system of 56 columns created the superstructure used to temporarily support roof so contractors could excavate to the necessary level. The next step involved demolishing the original concrete footings. For a demolition project of this stature and configuration, a traditional approach of chipping hammers didn’t seem logical. Hand-demolishing each pillar would have taken days, putting the destruction of all 28 columns, four chevrons and one buttress on a timeline of 8 months.

Besides the lengthy time commitment resulting from traditional demolition, there was another potential downfall to implementing that approach. The demolition of the structure required extreme precision. Because the bases of the original structures were going to be used as a foundation for the new pillars, engineers required specific amounts of structural material, including rebar and concrete, to be left intact. Concrete breakers could have damaged the rebar and risked microfracturing the concrete columns. The accuracy and highly regulated stipulations required on this renovation were not a good match for traditional demolition methods. There was a different option, though, that involved a process unfamiliar to many.

Hydrodemolition to the Rescue

Subcontractor Rhine Demolition used its connection with water blasting specialist Jetstream of Houston to find a precise, efficient and effective solution for the demolition. Jetstream recommended Redi Services, an industrial services support company based out of Lyman, Wyoming. Redi Services used two Aquajet Aqua Cutter 710V robots that allow the operator to reach horizontal, vertical and overhead areas thanks to a 3D positioning power head. But because everyone was working in the same area, trying to accomplish their part of the project on a tight schedule, it took diligent planning and careful choreography to keep everything moving and to avoid mishaps.

During the phase of the project that Redi Services was involved in, there were up to 175 contractors and subcontractors onsite at a time. With a significant number of groups working, it was important that the logistics planning also considered the safety of everyone involved. Contractors marked exclusion zones with red tape and flags to keep people on the jobsite a safe distance from the high-pressure water jets and the debris from the concrete removal. Besides the robots themselves, Redi Services used additional tower sections to accommodate the height of the columns. They also used two Hydroblast high-pressure water pumps, which provided 20,000-psi water pressure at 45 gpm (170 lpm). The pumps were positioned 50 ft (15m) from the work, with a 100-ft (30m) hose connecting them.

In total, Redi Services demolished structures that totaled 250 yd3 (191 m3) of material, all while keeping the rebar intact. The 1.5-in (38mm) rebar was installed in multiple rows, adding additional obstacles to the demolition. The Aquajet robot cut up to 2 ft (61 tm) thick per pass, enabling Redi Services to up to 3.5 yd (3.2 m) per hour, depending on the rebar placement.

Because of their familiarity with the process, and the quality of the equipment itself, Redi Services encountered very few holdups and issues on the project. They employed a team of eight each day, including one operator for each robot, one to operate each pump, one for each vacuum truck, and a supervisor and technician to support both robot “teams.”

The removal of each column was about a three-day process. Workers set up the equipment, spent 16-20 hours demolishing each structure, and then moved the equipment on to the next column. Redi Services completed the demolition in 30 days, working 8-hour shifts. Alternative methods, such as handheld chipping hammers, would have taken as long as eight months and wouldn’t have resulted in the same precision as the hydrodemolition approach. The Climate Pledge Arena continues to be the site for creative, innovative and efficient methods and equipment. After the original support piers were demolished, crews reconnected the roof to permanent support pillars. They implemented steel and concrete frames to form the seating area of the interior and continually add details that hint at completion. The arena is on track to be fully completed by fall 2021, and the time-saving hydrodemolition performed by Redi Services played a role in that. 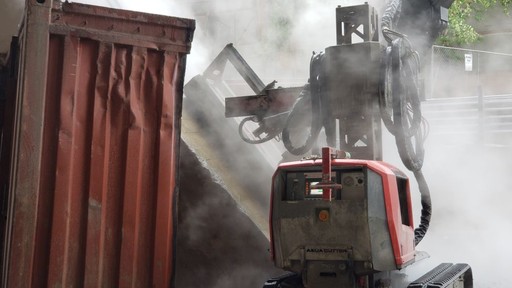 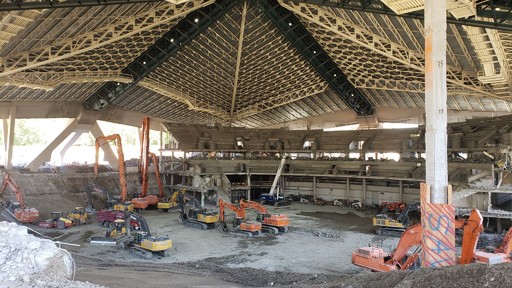 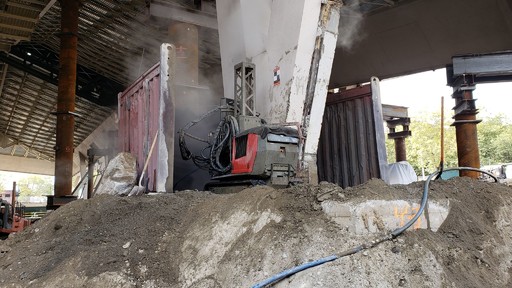