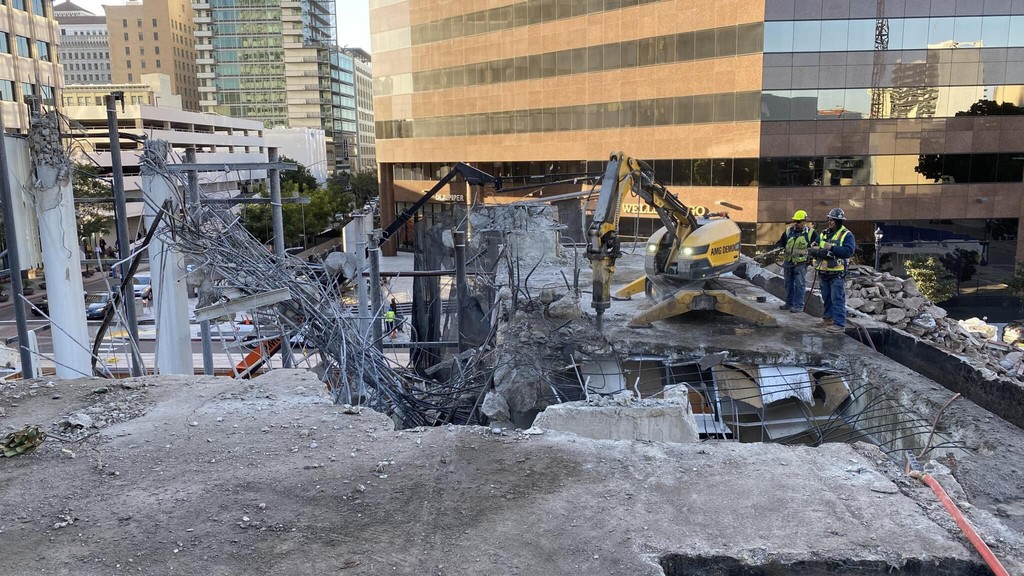 Like many cities with a long history, the skyline of San Diego, Calif., has changed significantly over the centuries. Even in the modern era, demolition and construction continue to transform California’s second-largest city. However, with growing populations and congested urban environments, demolition contractors are forced to find safer ways to remove older buildings that minimize impacts on the day-to-day lives of citizens.

AMG Demolition & Environmental Services Inc. is one such contractor. The company has partnered with Brokk to complete a number of “impossible” projects in the San Diego area, including a challenging demolition in the heart of downtown. The job required the top-down demolition of a five-story building. Low floor loads limited AMG’s equipment choices, but an even bigger challenge lay beneath the surface — a three-level underground parking structure that had to remain open throughout demolition.

“San Diego is an old city with a lot of old buildings that need to be removed to keep progress moving forward,” says Mike Gafa, Jr., AMG senior estimator and owner. “These buildings come with certain challenges. They have low floor loads. Access can be limited – sometimes there’s only a passenger elevator or single doorway to get to the site. And we’re having to remove hazardous materials like asbestos and lead paint. The Brokk robots are simply the ideal tool for the job. Pound for pound, nothing can compare.”

The company first turned to Brokk in 2016 to tackle a particularly robust top-down demolition of a 1940s-era Army depot that had become part of the at the Manchester Pacific Gateway waterfront development. A 6,945-lb (3,150kg) Brokk 280 to make short work of the 136-ft (41.5m) tall building, methodically demolishing 10-in (25.4-cm) thick concrete.

“As the depot came down, we were able to see how the Brokk machines might provide a competitive edge on a more congested jobsite,” Gafa says. “We just needed the right project to prove our theory.”

That project was taking shape in downtown San Diego, as general contractor CW Driver was awarded the contract to remove an existing five-story structure at 450 B Street, replacing it with a six-story multi-use office and retail tower.

The jobsite included a 30,000-ft2 (2,787-m2) footprint that had three-story underground parking garage as well as a one-story portion up to 15 feet high at street level. Then there was another 12,000-ft2 (1,115-m2) footprint that was tiered up to 45 ft (13.7 m) high. AMG’s job was to take down both portions – all while the underground parking garage remained open to the public.

The bustling city block also housed a tower owned by the Bank of America only 60 ft (18.3m) away. Bank facilities, offices and other amenities would remain open during demolition and subsequent construction, requiring crews to operate in off-peak hours and make other concessions to limit the disruption of daily life for the community. Additionally, no vibrations could pass to the Bank of America building during demolition, which meant saw cutting along the grid line at sidewalk level to separate the two structures.

These challenges were minor, though, and could easily be overcome by a number of demolition contractors in the San Diego area. However, the unique construction of the structure being demolished and the active parking garage below it required a more innovative solution — for which CW Driver turned to AMG.

First, the demolition specialist assessed the challenges presented by the concrete and glass building. The structure, a former bank, featured five 22x150-ft (6.7x45.7-m) “stair steps” climbing 15-42 ft (4.6-12.8 m) above the sidewalk. AMG needed to provide ample power to break through 24x36-in (70x91.4-cm) concrete grade beams and 8-in (20.3-cm) slabs without jeopardizing the structural integrity of the building as they worked or damaging the ground-level slab.

Below ground, there were even more challenges to contend with. AMG needed to find a way to ensure the safety and continued operation of a three-story parking structure — even while demolishing and excavating a 40x60-ft (12.2x18.3-m) opening for a new elevator core and adding footings.

To complete everything within the eight-week timeframe, AMG needed to maximize crew utilization — taking down the building and excavating the elevator core simultaneously. The jobsite and equipment required the precision of a complex surgical operation to ensure safety and optimize productivity.

After thoroughly planning every step of the process, installing extensive shoring and gutting the building, AMG began top-down demolition with two Brokk 300s. The 8,047-lb (3,650-kg) machines, equipped with BHB 455 breakers, provided ample hitting power — on par with a 33,000-lb (14,970-kg) excavator — while remaining below the 10,000-lb (4,536-kg) maximum floor load. An experienced Brokk operator and a spotter were all it took to methodically maneuver the machines down through the building, allowing AMG to reallocate additional crew members to other tasks.

As the Brokk operators worked their way through the thick concrete, a separate team quickly sorted, crushed and removed debris below. Steel plating, cushioned by tires, was employed to protect the slab.

While the structure came down over their heads, an additional crew of 20 tackled excavation of the elevator core.

“On a given day, we had about 40 to 50 people on the jobsite,” Gafa says. “In order to keep everyone safe and the project on schedule, they all had to work in concert, like a team of surgeons. At the end of each shift, we would re-evaluate our progress and shuffle crews and equipment to maximize productivity the following day.”

Thanks to a coordinated effort and the use of Brokk machines, AMG completed demolition in just 56 days — frequently operating in off-peak hours to limit disruptions to the public. From the 30,000-ft2 (2,787-m2) building alone, 7,600 tons of concrete were demolished, with all 7,600 tons being recycled. A further 1,000 tons of concrete were removed during excavation of the elevator core, along with 2,000 tons of dirt. In addition, AMG saved at least US$50,000 in labor in equipment costs by using robotic demolition rather than a more traditional approach with mini-excavators and hammers.

And before the dust had even settled, AMG’s Brokk 300s were already hard at work on the next “impossible” job requiring demolition robots — a mall renovation with even stricter load restrictions. The company’s two Brokk 110s were already on-site. Even with crews spread thin by the 450 B project, these 2,183-lb (990-kg) machines, ideal for interior demolition on floors where even skid steers were deemed too heavy, allowed AMG to begin work on the 18-month project. Gafa estimates the four Brokk units enable him to reduce necessary crew size for the project by about 15, giving AMG the capacity to take on more simultaneous projects without overextending itself.

These machines put AMG ahead of the curve, and we plan to stay there,” Gafa says. 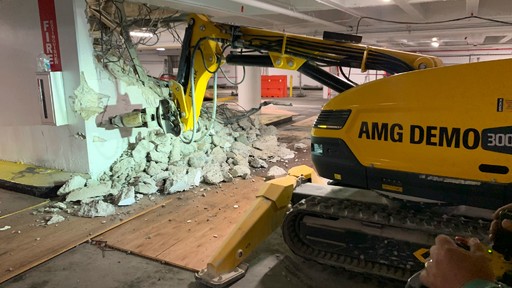 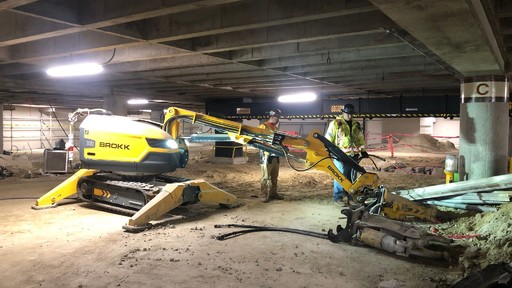 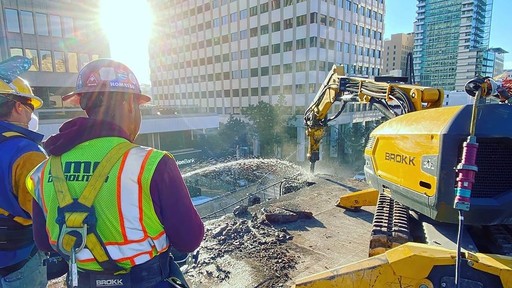