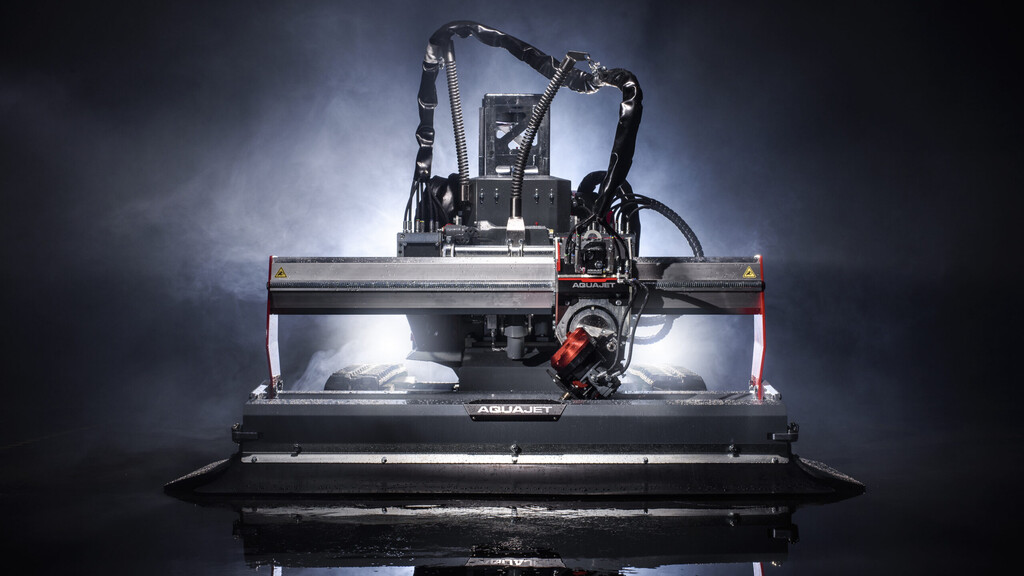 Aquajet introduced a number of new developments at the recent World of Concrete show in Las Vegas, including a completely new robot—the Aqua Cutter 750V. The new machine features Aquajet’s patented Infinity oscillation that moves the water jet in a figure of eight (or infinity) pattern, removing more concrete in a single pass while reducing shadowing, eliminating the risk of pipe holes and providing an ideal bonding surface. The 750V also features the next generation Evolution 3.0 control system that includes new functions, including the ability to automatically calculate optimal settings for lance motion for greater precision and efficiency.

Like all Aqua Cutter Robots, the 750V cleans and descales rebar without causing micro fracturing. It also maintains horizontal, vertical and overhead reach, making it suitable for a wide variety of concrete removal tasks, such as renovation and bridge and road repair.

The constant lance motion in an infinity pattern, rather than the standard wave pattern that has natural fluctuations in speed, enables the 750V to remove more material in a single pass, significantly reducing shadowing and making it unnecessary to follow up with hand lancing. The consistent motion also increases the digging effect and virtually eliminates pipe holes, resulting in a superior bonding surface and increased productivity.

Another benefit is the constant, low noise that is less disruptive in urban areas and other noise sensitive environments.

The 750V also shares several similarities with Aquajet’s innovative Ergo System, as the Infinity power head has Ergo style spring tensioned rollers and quick connection to the roller beam. It also uses absolute sensors, which means it automatically adjusts at the touch of a button. With a larger roller width and a new triangulated base frame for improved stability, the infinity power head contributes to precision while improving the result.

As part of its design, the 750V also includes an upgraded version of the Evolution Control System, which provides the ability to cut shapes and remove concrete at different depths in the same pass. The new version ratchets up its performance even more with an oscillation menu that automatically calculates optimal settings for the operator. This not only maximizes production, but also prevents miscalculations from manual adjustments. It also uses a color-based visual status light to show the state of the machine which allows operators to easily see when the machine is working correctly, when it needs attention and when automatic functions or the engine have stopped.

Another key feature is remote start and stop of the diesel engine through radio remote control, making it possible for the operator to stop or start the robot from a safe distance thereby eliminating the need for the machine to run all day. In addition, the machine will automatically shut down if there’s no activity for a certain amount of time thus saving battery power.

The 750V comes with the performance focused Aquajet precision drive. This provides highly accurate hydraulic movements, eliminating the inconsistencies that compromise the result. In automatic mode, the robot’s lance is highly controlled and always keeps the water jet in the ideal position, which is key to achieving a perfect hydrodemolition result.

With an all-new tracked system, the 750V is said to operate as smoothly as driving a car. This motion increases service life by eliminating bounces that can compromise components and improves the accuracy of nozzle distance to surface, further improving precision. The 750V is compatible with Aquajet’s line of accessories, as well as the Ecosilence high-pressure pump that supplies the water to run the machine and provides a cost-effective option for transport and storage. The purpose-built insulated container includes the pump, large capacity diesel engine and control system, with a convenient storage area for the robot and accessories.

Aquajet also showed the EcoClear® water treatment system which works with Aquajet’s full line of hydrodemolition robots to treat wastewater generated by neutralizing pH, greatly reducing its turbidity. This means that it can be safely released back into the environment or recirculated in the equipment. The EcoClear system enables the hydrodemolition contractor to treat wastewater in real time and maintain an environmentally sound jobsite.

EcoClear moves as much as 1,060 ft3 (20m3) per hour through a series of treatment chambers that neutralizes alkaline water to a pH of six to nine and reduces turbidity to just 20-25mg particles/l. The entire process can be monitored and controlled online with the Reco control system. Optical turbidity sensors and pH probes continuously monitor and record the water quality to ensure only clean water is discharged. If the water does not meet set limits, the feed pump automatically shuts down to prevent dirty water from escaping. The water then starts to recirculate until it meets the preset values of pH and turbidity.

Aquajet also highlighted the Ecosilence 3.0 that reduces noise and allows for a more compact jobsite, while enhancing environmental stewardship and lowering overall operating costs. The Ecosilence features integrated auto start/stop technology that improves fuel consumption, which saves as much as 6 gallons (25 liters) per/day of fuel for a smaller carbon footprint. The Ecosilence is compact, with the entire self-contained system fitting in a standard shipping container. It also produces less noise while in operation, making it ideal for use in urban areas with limited space and strict noise restrictions. The unit also has dramatically improved pumping pressure, operating as high as 43,500 psi (3,000 bar) and provides ample power for hydrodemolition applications such as concrete renovation and road and bridge repair.

The Ecosilence 3.0 features an environmentally friendly, low emission engine and high-pressure pump to power Aquajet’s range of Aqua Cutter hydrodemolition robots. The skid mounted unit employs auto start/stop technology, which temporarily shuts down the engine when not in operation to reduce idling time by up to 50%. The engine automatically starts up when operation resumes. In this way, the Ecosilence saves money and significantly reduces emissions. The integrated engine and high-pressure pump unit pairs with a liquid to air heat exchanger to provide quiet, efficient operation for all hydrodemolition applications.

Aquajet Ergo system incorporates the controller unit, which powers and controls the hydraulics, the Ergo Power Head to manipulates the high-pressure lance, and either the spin or climber—unique systems used to support and maneuver the power head, based on project needs. The climber attaches to any standard scaffolding pipes and robotically moves along it to deliver powerful hydrodemolition forces for vertical concrete removal and repair, such as high-rise construction. The robot can handle higher volumes of water, as much as four times greater reaction force than a human operator with a hand lance. This means the machine can remove concrete faster and easier. 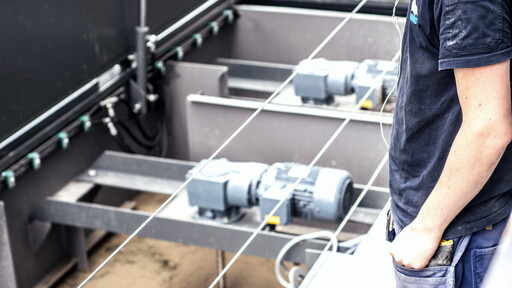 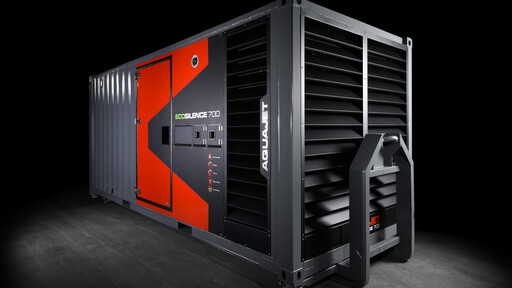 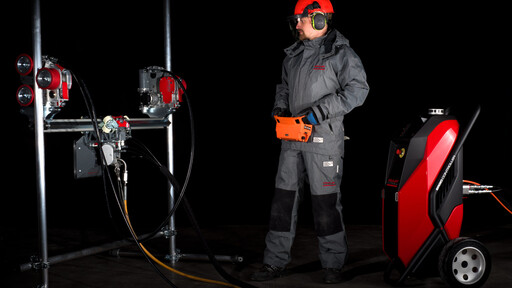