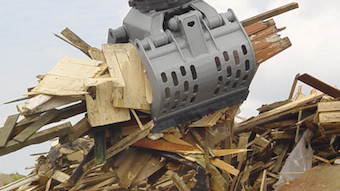 It could be argued a good beer goes well with just about anything. After a hot summer day on a demolition job, though, a light beer with lime will probably taste more refreshing than a heavy stout. Finding that perfect malt after a long day feels great, and finding a perfect-fitting demolition attachment will get that beer served up a lot sooner.

With hundreds of sizes and styles of demolition attachments on the market — from small grapples to massive pulverizers — it’s not as easy as picking one, attaching it to an excavator and expecting top production. Like a good beer, some tools just fit better at different times.

Making the Perfect Match
First, consider the type of work the attachment will perform. Multi-quick processors, shears, crushers, pulverizers and demolition grapples tend to be the top picks for primary demolition. The choice depends on the type of material, and how it needs to be broken up.

Crusher and pulverizer attachments, for example, best tackle jobs made up of mostly concrete. Choose a crusher — or “cracker” — if the structure is composed of concrete with little or no rebar, and if it’s necessary to break the concrete into chunks large enough for easy sorting and recycling. A pulverizer better handles concrete that’s heavily reinforced with rebar. It will break the concrete into small pieces and cut through the embedded rebar, allowing the concrete to fall to the ground rather than hang onto the rebar.

Pulverizers also can break concrete into manageable sizes during secondary demolition. If the demolition involves both crushing concrete and cutting steel, contractors should consider combi-crushers that incorporate both cutting edges and teeth.

For a job that is primarily steel, a demolition processor with shear jaws or a mobile shear attachment will work best compared with a tool meant for multiple types of material.

When working jobs with light materials, such as wood or brick, use a demolition grapple. Besides breaking apart materials, rotating grapples work well for sorting during secondary demolition, and increase versatility and productivity by allowing a wide range of movement.

While multi-quick processors may cost as much as 20% more than other attachments, they more than make up for that difference in their versatility achievable through the interchangeable jaw sets.

Powered Up
A longstanding rule of thumb holds that the larger the cylinder, the more powerful the tool. Because of this, contractors seeking more demolition power in the past had to buy or rent a larger excavator to handle the larger attachment. That’s no longer the case.

As manufacturers incorporate more technology into attachments, some are achieving as much as 25% more power without increasing the cylinder size. Additional chambers built into the cylinder allow for as much as 20% more surface area, resulting in an attachment with the same power as a tool two sizes larger.

This technology gives contractors access to higher crushing and cutting forces previously provided only by larger and costlier tools and carriers. The high power-to-weight ratio — higher on attachments with this technology than any other tool in its size class — also provides more efficient high-reach demolition.

Some attachments with innovative cylinder technology reduce carrier fuel consumption by up to 20% compared with other models. In some cases, the attachment’s efficient design allows it to function normally when the carrier is set in economy mode, achieving the same performance as competitive attachments on an excavator running at full throttle.

If the Tool Fits
Of course, the best attachment in the world still needs a suitable carrier to perform well. Too heavy an attachment can cause excessive wear to the excavator and will affect performance. In addition, tools that are too heavy for a machine are a safety risk for other workers near the carrier while an attachment that is too small reduces productivity.

Also ensure the carrier has enough hydraulic capacity to feed the attachment. Inadequate flow or hydraulic pressure will slow the tool’s cycle times, reducing productivity. Too little pressure also results in less closing force or torque, depending on the attachment.

Also check the attachment’s hydraulic circuit requirements. For example, rotation shears and multi-quick processors require two double-acting hydraulic circuits, one circuit for opening and closing the jaw and one for 360-degree rotation. Attachments that don’t rotate, such as static pulverizers or shears, only require one double-acting circuit.

Easy Fix?
One method for choosing a low-maintenance attachment is to find a tool with no or very few protruding parts, such as hydraulic hoses. These can be easily damaged during operation, particularly in harsh demolition environments. Look for attachments with these components enclosed within the tool yet are easy to access through service openings.

Also keep wear parts in mind. Shear and crushing attachments’ cutting edges and teeth need to be replaced when worn. Exchangeable cutting edges are an industry standard, but it’s still smart to ensure they are available.

When considering multi-quick processors, pay attention to how quickly jaws can be switched out. Some manufacturers build multi-quick processors with jaws that operators can change within minutes on site, compared with the hours needed to bring many other attachments back to the shop to exchange. Workers only need to manually remove one pin from quick-exchange models during change-outs, compared to three from many other manufacturers’ processors. The rest of the jaw exchange process is done hydraulically from the safety of the cab. This system also virtually eliminates the danger of the jaw falling and injuring a worker after the last pin is removed.

Choosing the most effective pairing of tool and carrier goes beyond application and power. Carefully consider every aspect of the attachment and carrier to form a pair that will boost productivity, ROI and, potentially, open up opportunities to work in new applications. The right choice will mean the perfect match.