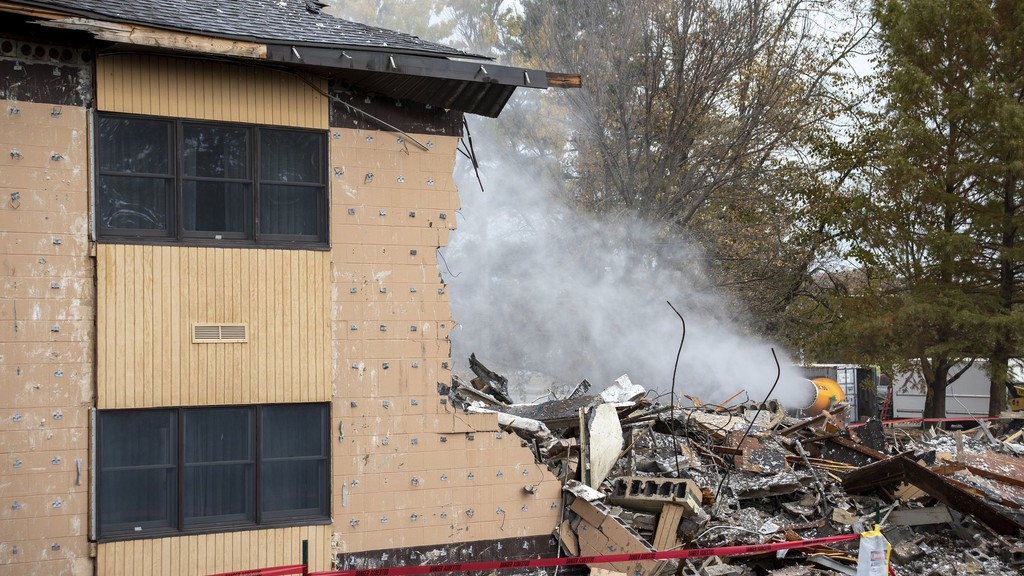 Military contracts can be difficult to secure, and general contractors need to display an ability to complete the job in a timely manner, maintain a safe workplace and comply with the environmental standards required for each phase. Knowledge, reputation and reliability made DMS Contracting of Mascoutah, Ill., the right choice for a demolition project at an Illinois military base.

Six buildings once used as barracks housing hundreds of soldiers were transformed and expanded into a hotel for visiting family, dignitaries, and soldiers on temporary assignment. Project leads chose a prime contractor for the construction phase, and DMS won the bid as a subcontractor for demolition on the 8-acre (3.2-hectare) site. Built in different eras, some buildings were constructed of hollow-core cinderblock with beams, while others were wood. With an eight-month schedule for demolition, DMS used four excavators with different attachments. One had a hydraulic multi-processor with a concrete cutter jaw that broke concrete and made easy work of metal support beams. Others had interchangeable buckets and accessories that helped take down, sort and load the debris into waste containers to be covered and transported to either the local recycling facility or landfill.

Although much of the dust is not considered harmful, many of these emissions can contain traces of HAPs, from asbestos to silica, which need to be mitigated at the point of emission and prevented from becoming airborne. Currently, the most common method to control airborne particles is by using water. In contrast, atomized mist droplets, ranging between 50 and 200 ?m in size, linger in the air and create virtually no slipstream, facilitating collisions with airborne particles and driving them to the ground. Atomized mist also settles lightly on material surfaces, offering ground-level suppression without soaking the substrates.

Atomized mist technology is considered MACT because of its superior ability to capture airborne particulates and pull them from the air using a fraction of the water. The specialized cannons with front-mounted nozzle manifolds fracture pressurized water into a mist that is propelled by the high-powered fan in the back. Mounted on a roadworthy mobile carriage, the DustBoss DB-60 has a powerful 25 HP industrial fan generating 30,000 ft3/min (849.50 m3/min). Water is pumped through 30 atomizing nozzles that fracture the droplets into an engineered mist that’s distributed in a 200-ft (60 m) cone-shaped pattern. The mist can be directed at a specific activity or used to raise the humidity level over a large area using the 40º oscillator and 0-50º vertical height adjustment, which allows the machine to deliver approximately 21,000 ft2 (1,950 m2) of coverage. Capable of covering as much as 125,000 ft2 (11,613 m2) when equipped with optional 359º oscillation and consuming only 12-18 gallons/min (45-71 liters/min), the DB-60 limits runoff and pooling associated with other water-based suppression methods.

The unit can be controlled either by a digital touch screen display housed in a sturdy NEMA 3 cabinet on the machine or via a remote hand-held device, so the settings can be easily adjusted by workers on the ground or by nearby excavator operators. DMS powered the unit using a three-phase diesel generator mounted on a separate trailer and drew water from the local hydrant system. Using a pickup truck or side-by-side to move the DB-60 to various points on the site based on activity and winds, operators were able to properly position the unit and adjust the settings for maximum coverage. While the machine operated independently, workers were able to perform other duties until a change was needed.

Operators report that the powerful fan allows the mist to cover the entire operational area, offering both topical treatment and airborne dust suppression. Disruption of settled dust by loading and separating material was also well-mitigated by the unit, allowing all stages of the operation to be compliant with little worker exposure to machinery or debris. This improved safety on the site and reduced the cost of operation.

“As it turns out, the DustBoss was one of the most reliable, rugged and versatile pieces of equipment on the site,” Mazander says. “It’s a great tool that’s maintenance-free and a pleasure to work with. We had no issues with dust and no emission-related violations.” 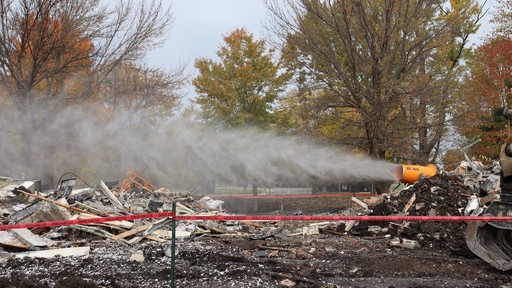 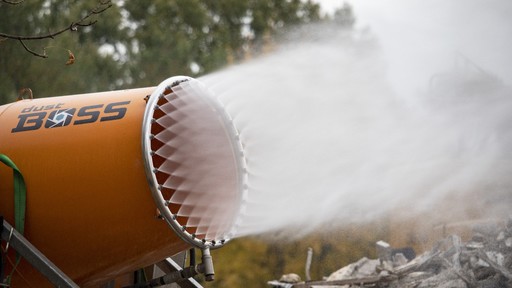