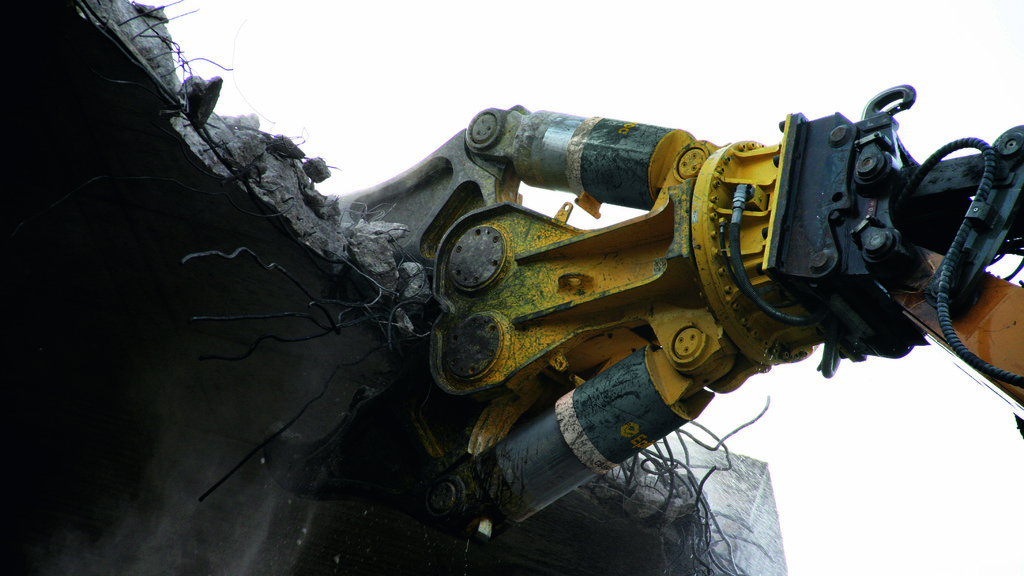 Last year, the Oettinger Group tested the world’s second prototype of the CB 5500 concrete demolition cutter. A particularly powerful attachment was required for the partial demolition of a former public administration building with integrated air-raid shelter in Karlsruhe, Germany. The buildings comprised 635,664 ft3 (18,000 m³) of enclosed space and 4,000 tons of reinforced concrete material.

Initial gutting and remediation work was carried out with the aid of a MG 5000 Multi Grapple. This was followed by the demolition of a connecting bridge and the public building, including the heavily reinforced air-raid shelter.

The well-proven CC 5000 demolition cutters were used for the above-ground demolition. Strong walls and substantial foundations were waiting in the basement. The walls which had been pre-slit with the HB 4700 hydraulic hammer were finally cut out with the new CB 5500 concrete buster and prepared for pulverization.

The CB 5500 was designed as a two-cylinder system, as is usual with Epiroc cutters. This brings more force to the tip and prevents reaction forces. This ensures outstanding performance while protecting the carrier equipment. The combination of two movable cutter arms and two hydraulic cylinders provides a further benefit—an almost constant crushing force, even with almost closed arms.

While conventional models with only one cylinder or only one movable arm usually achieve a maximum of 70 to 80% closing force at the tip of the cutters, the CB 5500 can maintain up to 90% in an (almost) closed condition. The independently movable cutter arms also prevent displacement forces on the cutter and the excavator.

The CB 5500 is designed for the 50t to 65t carrier class and is operated with an working pressure of 5,076 psi (350 bar). The jaw width of the CB 5500 is 5.3 ft (1.6m) and the jaw depth is 3.5 ft (1.06m). The jaws are made of Hardox 650 and additionally reinforced in the areas most exposed to stress. The tips can be welded on. The lubrication points are also optimally accessible and yet protected against possible damage.

It features impressive opening and closing times of 4.1 and 3.5 seconds respectively, as well as a cutting force of 150 tons at the jaw tip. The short working cycles are made possible by the built-in rapid motion valve.