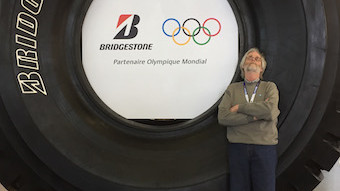 I hadn’t expected to receive such a compliment, even in a city as closely associated with romance as Paris.

But neither had the young lady at a sidewalk café expected to be gifted a rose from a somewhat older (OK…a lot older), still jet-lagged construction journalist whose innocent mangling of basic French made it pretty obvious he was a first-time American tourist.

So what? It’s Paris, after all.

The fact that I was even in Paris was itself rather bit mind-boggling. Since January, when PDi Editor-in-Chief Jan Hermansson had extended an invitation be part of the team covering INTERMAT, one of Europe’s major construction trade shows, I’d embarked on a personal crash course to learn everything about a city I knew mostly by reputation, movies, and many summers devoted to watching the Tour de France. From the first pages of Hemingway’s A Movable Feast, though I knew my allotted one week would hardly be enough. Making the most of every moment in the City of Light was a must.

Business before pleasure…sort of
It’s probably overly simplistic to characterize INTERMAT as being just like Bauma and ConExpo-Con/Agg, the other members of the construction industry’s megashow triad, with the main difference being that most everything is in French. Well, that is true to a point.

According to organizer Comexposium’s post-show report, approximately 30% of the 2018 show’s 173,300 visitors were, like me, from outside France, representing 160 countries. So even the most rudimentary Parlez-vous anglais? was usually enough to break the ice at any booth. (Better rudimentary than rude, I suppose.)

And besides, “construction” is a universal language at shows like these. INTERMAT offered an expansive assortment of equipment displays, outdoor demonstrations, and vendors eagerly touting their latest and greatest offerings, rekindling relationships with longtime customers, or helping potential buyers understand why their products and services are that much better than the other fellows’ down the aisle.

It doesn’t take long to figure out that absent Bauma’s sheer size and Conexpo’s Las Vegas glitz, INTERMAT is a distinctly French affair.

Where else, for example, would the first booth visitors of the morning be treated to champagne, or sample complimentary plates of cheese and fruit instead of the trade show staples of candy or pretzels? And I was pleased to discover that Brokk’s field-cooked French sausage sure tasted like a sans-sauce version of the Virginia pork barbecue I’ve eaten most of my life.

The expansive indoor displays of the larger equipment manufacturers—think Volvo, Doosan Bobcat, etc.—included “Fan Shops” where visitors could purchase the same kind of gear one associates with favorite sports teams. Giant video screens were also oft-employed attention-getters, as were in-booth participatory games such as the slot car track at Swedish telematics provider, TelliQ.

Matched against Rudy, a TelliQ representative, I managed my best laps as long as I stayed focused on keeping my car literally and figuratively on track. Rudy, being a typical multi-tasking Millennial, had no problem managing his car while pitching TelliQ’s services. Concentration ultimately did him in, but he would “live” to race again against the next booth visitor.

Though several exhibitors splurged on in-booth entertainment for their socials or to lure passers-by, none could top CASE’s high-energy co-ed dance team, which performed rhythm-heavy routines using the company’s equipment displays as backdrops. Other booth hostesses could be found throughout the show, and it was usually PDi’s global sales director Andrei Bushmarin who found them.

And unlike ConExpo, where casinos and other entertainment diversions are literally across the street, INTERMAT is sort of a world unto itself, being held far from the city center at the massive Parc des Expositions. Indeed, the closest many exhibitors get to seeing the Eifel Tower is in the souvenir shops at nearby Charles de Gaulle Airport, as most their off-hours time is spent at nearby hotels and shopping centers. One U.S. vendor lamented there was very little “Parisian” about his visit, and that any envy expressed by friends’ back home was sadly misplaced.

On the town
Not so for me and my PDi colleagues, all of whom, being old Paris hands, were as eager to introduce me their favorite neighborhoods as they were to revisit them. Our restaurant and pub searches took us through the narrow, bustling streets of the famed Latin Quarter, Montparnasse, and Montmartre neighborhoods—little changed from the days of Hemingway, Stein, and countless generations of bohemians (aside from the neon signs and omnipresent tourists wielding selfie-sticks, of course).

And the food—magnifique! Not interested in bringing extra pounds home as souvenirs, I stuck with seafood—mussels, salmon, and a risotto dish that I regretted wasn’t bottomless. While I had relied on my colleagues’ wine sense for drinking, I was gratified to locate a Frog pub which had a decent American-style pale ale on tap.

They also have a knack for creating ambience in the most unexpected of ways. In Montmartre, an Algerian-born acoustic guitarist who had been serenading a group of Spanish diners in the next room happened by our table. PDi Europe editor, the amazingly multi-lingual Mikael Karlsson, struck up a conversation, and before we knew it, our guitarist had pulled up a chair for an impromptu performance.

Quite an interesting repertoire too—from Jacques Brel to Frank Sinatra and the Eagles—perhaps a salute to me and my fellow American, PDi sales manager Darren Dunay. I’m not sure if other patrons were more entertained or bemused by my attempt to sing along with “Hotel California.” (You think it’s easy to keep up with Spanish guitar licks on that song? Try it!) But at the end of the evening, it was our accompanist who took home the well-earned extra euros; not me.

Nevertheless, the revelry proved a welcome balm following my up-close-and-personal experience with another French tradition—labor strikes. None-too-pleased with the current government’s proposed economic reforms, France’s public-sector unions have littered the spring months with a series of work slowdowns and protests, some of which have become rather violent. (In fact, the hotel where Jan and Andre were lodging still bore scars of a demonstration from the previous week.)

Among the disgruntled groups is the transit union, responsible for operating the nation’s train system, including the one I was counting on to transport me daily from my Montparnasse hotel to INTERMAT and back. While the union had the courtesy to announce service disruption days in advance, the actual nature of those disruptions seems to be part une surprise.

That’s why one afternoon found me on the platform of the Parc des Expositions transit station along with several hundred other inconvenienced passengers waiting for our idled train to proceed. All announcements were in French (well, duh!), which did this innocent abroad little good in figuring out what was going on. Luckily an INTERMAT visitor from Belgium noticed my dilemma and translated—the electrified system had been shut down because of strikers occupying the tracks. All traffic on the north side of Paris was affected.

“We don’t know what’s happening,” my multi-lingual life preserver sighed. “We just have to wait.”

And wait we did for about an hour, until another announcement in French sparked a rush to reboard the train. The tracks had been cleared and power restored. The doors closed and…nothing. Seems the engineer spotted someone walking on the tracks toward the station. He doesn’t appear to be a striker or even a vagrant; just a casual dude with a backpack and an iPhone. Despite being roundly cussed out (I suppose) by one of the station attendants, who apparently had no arrest powers, the dude simply shrugged his shoulders, got off the tracks, and ambled on his way.

With more disruptions waiting at the Gard du Nord station, I began searching for an alternate route. Paris’s famed Metropolitan subway was operating normally, but which line on the multi-colored map would get me back to my hotel?

“Parlez-vous anglais?” I asked the station guide? He nodded. Yay me!

My language success was short-lived, as feeble attempts to pronounce Denfert Rochereau station drew only curious looks and head shakes. The only other thing I could think of to say was that my station was adjacent to the Paris Catacombs.

“Ah, catacombes!” my guide realized, and within a few minutes, I was on the right Metro line home. Though the communication gap was largely my making, I couldn’t help but recall Mark Twain’s observation about Americans’ frustration at their inability to make French people understand their own language.

Grand finale
Still, I felt “baptized” as a Parisian by the transit experience, endowing me with the confidence to handle any circumstance for the remainder of my visit, which included a “tourist day” walking tour of all the city’s picture-postcard sites—the Eifel Tower, Arc de Triomphe, Champs Elysees, the courtyard of the Louvre, the Quais de la Seine, Notre Dame—as well as landmarks meaningful only to fan of the aforementioned Tour de France. (Traveling alone means it’s OK to seek out street corners and underpasses only because they’re part of the peloton’s route every July.)

After a week’s worth of seeming endless walking and gawking, it was time to go home. But Paris wasn’t done with me yet.

A morning stroll through the neighborhood around my hotel led me to an open-air street side market, offering all kinds of fish, cheese, farm-fresh fruits and vegetables, and even some cheap clothes. With a small tub of au revoir strawberries (so named because of my impending departure and their short remaining time outside my belly), I found a sunny park bench and reflected on the week’s adventures—the restaurants, the people, the trade show, the transit strike, the girl…

Ah yes, the girl and the rose. How could I forget?

It was late in Montmartre, and we were in search of one last beer before Ubering back to our respective hotels. Having found a half-closed pub, we were sitting outside, enjoying the cool of the evening when I discovered a long-stemmed rose under my chair. Had it been dropped? Forgotten? Collateral damage from a lovers’ spat?

It’d be a shame to just leave it there, I thought. And with a lively trio of young people just a few tables away, the solution seemed obvious.

“Mon cheri,” I said to the young lady among them. “For you.” She beamed…and asked in English if I was an American. (No Maurice Chevalier moment for me.)

Explaining that I simply thought it was a Parisian tradition to give flowers to pretty girls, I returned to my PDi colleagues, who congratulated me on my boldness.

Well, perhaps this isn’t quite the romantic interlude that Victor Hugo or Ernest Hemingway would craft, but it sure made my day. Shoot, it made my whole week. And what a week it was.