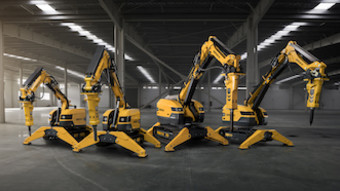 Brokk has done it again, but this time more powerful than ever and maybe even more innovative. In April this year, four new Brokk models were released. The company's biggest product launch ever.

Brokk represents an unprecedented success story. When the industry believes that the bow on the demolition robot product line can not be stretched any further, Brokk surprises with new healthy pursuits.

As Brokk has been quiet on the new product front for some time, nobody attending the company’s international dealer meeting in March expected to see any new robots showcased. But there they were, the new Brokk 170, Brokk 200, Brokk 300, and Brokk 520D, a diesel version of the Brokk 500.

Since 2016, Brokk has shown a very powerful sales increase, perhaps the largest ever in the company's history. The US market has grown fast and strong as well, resulting in a a wholly owned sales and service subsidiary. And there’s last year’s acquisition of Aquajet Systems in 2017, which brought a highly profitable hydrodemolition manufacturer into the fold.

What makes sets Brokk’s machines--and now, Aquajet products—apart from others? PDa’s own theory is that the demolition industry’s own development and provided an ideal backdrop for Brokk and Aquajet’s keen commitment to developing their products for multiple applications. (Perhaps Brokk could have developed even faster in a larger ownership context, but would the industry have been mature enough for it?)

“An important part of our success is our relationship with the users of our technology,” says Brokk CEO Martin Krupicka. “We do not sell our clients just products without an effective solution that makes them more efficient and profitable in their work.

Here, Krupicka refers to Brokk SmartPower,TMa concept launched in 2016, but one that might not have proven as successful had it been introduced earlier.

Technically, SmartPower incorporates a brand new electric drive line combined with a new monitoring system. It enables Brokk to get much more power in a machine without getting up in size. A good example of this is the development of Brokk's machines in the 3t class, where the Brokk 260 has a power output of 30 hp (22kW), the Brokk 280 with SmartPower has 36 hp (27kW) and the brand new Brokk 300 with the second generation SmartPower has a full 50 hp (37kW) power output.

“The SmartPower concept delivers the optimum machine solution to all of these sectors, with the focus being that the machine will last for a long time and operate as much as possible,” Krupicka says.

In addition to the increased power output, SmartPower is the first electrical system developed from scratch inhouse to cope with the challenging environment of demolition robots (i.e., vigorous vibrations, dust, etc.). By removing 70% of cables and connectors, as well as brand new proprietary components, Brokk has significantly increased operational reliability over time.

Krupicka admits a Brokk can be a hassle too.

“If a problem occurs, priority number one is to get the machine in place as soon as possible,” he says. “That is why we have placed great emphasis on both the technical design of the machines and the level of competence of our service technicians globally. I think we have reached so far today with our latest product news and with Brokk SmartPower that we have managed to create a formula for the ultimate machine solution for demolition robots. And we are quite proud of that.”

If we mention SmartPower, we also need to mention SmartDesign and SmartRemote that are also part of the new Brokk SmartConcept.TMSmartDesign is based on the fact that the operator can easily maintain the machine daily in as easy a way as possible, without having to lift the hoods for control or lubrication, and that the entire machine is built to be easy to service and maintain continuously in the workplace.

SmartRemote is about ergonomics and productivity for the operator. Ergonomics are based on Brokk’s patented solution to have the handle around the waist to remove weight from the shoulders and back, as well as the joysticks’ design with short joysticks that make the operator rest the arms on the box. And productivity is optimized by using more expensive professional radio communication technology, and the design of the control box makes the operator no need to look down or depend on the screen to drive the Brokk machine.

With its four new models, this formula is further consolidated. Before presenting the four new models recently launched, it was recognized that there was quite a gap between Brokk 160 and Brokk 280. By launching Brokk 170, which will phase out Brokk 160, as well as the launch of Brokk 200 the gap has been filled. But that is not enough. Similarly, the additions of the Brokk 300 means an eventual phase-out of the relatively new Brokk 280.

This launch is Brokk's largest ever and the new models can easily be described as Brokk 170 is the lightweight and strong model while the Brokk 200 is powerful and flexible. Brokk 300 is the versatile and top-returning and the Brokk 520D diesel-powered is really a heavy model that can handle any tough environment where there is no electricity available.

Brokk 170, weighing 1.6t, takes the best from Brokk 160 and incorporates the complete Brokk SmartConcept,™ the power of SmartPower, the reliability of SmartDesign, and the ergonomics and productivity of SmartRemote. That makes Brokk 170 the ultimate construction tool for the construction industry. With a 32 hp (24kW) SmartPower electronics, this lightweight machine produces 15% more power than the predecessor. It develops impressive impact with the new hydraulic breaker Brokk BHB 205 and brutal power with the new concrete crusher Darda CC440. It has nevertheless retained the same compact physical dimensions as the Brokk 160, and the many tools are equally suitable for both models.

The new Brokk 200 defines a new weight class for demolition robots that fill the gap between Brokk 170 and Brokk 300. And it does it by squeezing the power of one 6,834-lb (3,100kg) heavy Brokk 280 in a handy package of just 4,630 lb (2,100kg), a dividend of the Brokk SmartPower technology. This 37-hp (27.5kW) machine can carry gear that is a weight class higher than its size, and it has the hydraulic power to handle it. Unlike Brokk 170, Brokk 200 is equipped with the new breaker Brokk BHB 305, which gives 40% greater impact, and the new, powerful Darda concrete crusher CC480.

The Brokk 200 has 15 percent longer vertical and horizontal reach, despite much the same compact dimensions as the Brokk 160. The extra chassis length and machine weight guarantee outstanding balance even when handling the heavier and more powerful tools. All in all, the Brokk 200 sets a new standard for compact remote controlled power and is a suitable machine for heavy work in hard-to-reach locations.

Brokk 300 is a good example of how quickly Brokk'’s demolition robots are developed to meet the industry’s ever higher demands. It’s equipped with the more powerful Brokk BHB 455 breaker that gives 40% greater impact. Provided with the new generation of Brokk SmartPower technology, the power increases to 50 hp (37kW), providing the hydraulic flow and pressure required for the machine to efficiently drive its heavier and more powerful tools.

“With its power, reach and stability, this model will be highly appreciated in the industry,” Krupicka says.

Last but not least, Brokk sets a new standard for diesel-powered robots with the Brokk 520D with a larger hydraulic breaker that gives 40% more impact than Brokk 400D, as it replaces. The environmentally friendly 5t machine is available with a Tier 4 Final Kohler engine that meets the new emission standards in North America, or a Kubota engine for South America.

The new Brokk 520D is a bit heavier and longer than the predecessor Brokk 400D with a larger BHB 705 breaker and nearly 10 in (250 mm) longer working range. Thanks to robust arm systems and increased hydraulics, the Brokk 520D can use the heavier and more powerful tools already available for Brokk 500 released last year. As crown of the work, the Brokk 520D is also equipped with the smart enhancements Brokk SmartDesign that facilitates day-to-day maintenance and increased operating time.

What will be the next step?

These four new demolition robots reflect Brokk’s unwavering focus on innovation, higher performance, and more operating time for customers all over the world. Each of these new models offers the very latest of what the technology can achieve in terms of robust reliability and power versus weight.

The new machines will be delivered this summer. As mentioned, Brokk has not stopped surprising the demolition world during the last decade regarding with its new launches and in the past two years the rate of development has been extremely high. It will be interesting to see how Brokk and Aquajet can take demolition and hydrodemolition techniques to new levels. 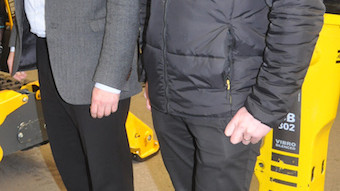