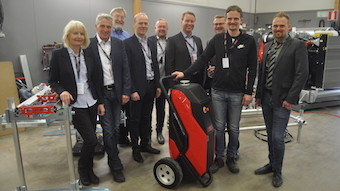 Exact, Efficient, and Easy Hydrodemolition With the New

Exact, Efficient, and Easy Hydrodemolition With the New Ergo

Aquajet Systems’ annual “Hydrodemolition Days” at its Holsbybrunn, Sweden, headquarters provides suppliers and customers an opportunity to see new products with displays and demonstrations. This year’s event, in April, attracted more than 150 people from all corners in the world—a reminder of the interest in and need for hydrodemolition technology in many different contexts, regardless of country.

Excitement was in the air on the first day, as visitors gathered in one of the manufacturing halls in front of a temporary building scene. Aquajet Systems CEO Roger Simonsson welcomed the guests, reminding them that Aquajet Systems celebrates its 30th anniversary this year. Simonsson hinted at something special to come with his closing statement, “Now, we will put in the next gear.”

Next up was Martin Krupicka, CEO of Brokk AB, which acquired Aquajet Systems in 2017. Krupicka gave an interesting lecture on Brokk’s history, technology, product method, and its product line. He also collaborated in how Brokk and Aquajet Systems together face a new chapter in which the Brokk method and Aquajet Systems method can be linked together.

New ERGO and some more

And then it was time for what everyone had been waiting for. With a light and sound show worthy of a “Star Wars” movie opening, Aquajet Systems Design & Engineering Director Ronnie Hilmersson entered the stage. He started a little cautiously in presenting Aquajet’s new Super Lance System 3000, a new lance system with capacity up to 43,511 psi (3,000 bar). Another feature was the reduction of the lance diameter from 1.7 in (45mm) to 1.4 in (36mm), as well as some improvements on the nozzle. The system is easy to mount and equipped with standard couplings for a more flexible system.

Then, as expected, Aquajet’s new product concept, ERGO, was introduced. Hilmersson emphasized that ERGO is a groundbreaking system for simple, safe, and versatile work in industrial operations and, in particular, hydrodemolition work.

The heart of the system is the new ERGO Controller, which weighs only 216 lb (98 kg) and is smooth and easy to maneuver and move. “It’s like a small and smooth robot without the crawler tracks,” Hilmersson said.

ERGO Controller is the power source for running the other new products in the ERGO family. Everything is innovative in the smallest detail including the new control box, a number of new hydraulic quick-connect solutions, and a “start kit” called ERGO Go.

Next to be announced was the ERGO Climber, a frame system that can be quickly built using standard scaffolding pipes. It is packed with effective water nozzles that effectively remove damaged concrete in very difficult and confined areas. A complete system measures 5 ft2 (1.5m2), and has a total weight of 279 lb (85kg). The system is so easy to manage that one worker can carry all parts.

The next important tool in the ERGO system is ERGO Spine, a rail system for different types of convex or concave surfaces, such as concrete pillars. Like ERGO Climber, ERGO Spine is very light-weight. New aluminum rail reduce the weight significantly and the 6.5 ft (2m) rail sections weigh only 44 lb (20kg). ERGO Spine’s flexibility increases accessibility significantly at work, and can be adapted for use with a Brokk robot. In addition, the system can be extended and expanded as much as needed. Each section between the supports measures two meters and, for example, a complete 6.5 ft2 (2m2) ERGO Spine system weighs a total of 276 lb (125 kg).

“Our new ERGO family will take the hydrodemolition technology and industrial cleaning work several steps further,” Simonsson said. “The new technology is considerably more accessible and efficient to work with. ERGO also opens up for other entrepreneurs than specialized hydrodemolition contractors to start working with this technology. An exciting future lies ahead of us.”

Aquajet from start to finish

After getting a closer at the new products, visitors were treated to an interesting and fun “history lesson” from Aquajet founder Stefan Hilmersson. He traced the company’s origins from its founding as a hydrodemolition contractor to becoming the world’s biggest manufacturer of hydrodemolition equipment. That was followed by live demonstrations of the new products outdoors, and a day-ending banquet.

Day 2 was devoted to various product and business meetings between the manufacturer and its customers, as well as separate meetings with Aquajet’s distributors worldwide.