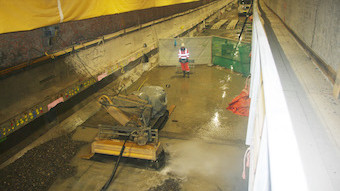 The underwater Maastunnel in Rotterdam, The Netherlands, was completed in 1942. Separate parts of the tunnel were built in a dry dock, floated into place, and sunk into a trench dug in the river bottom. The Maastunnel was the world’s first rectangular shaped underwater tunnel built in this way.

After many years’ service, the tunnel is undergoing badly needed renovation work. Some years ago, tunnel experts discovered that the concrete structure of the tunnel had decayed. In addition, the Maastunnel must soon comply with the latest EU laws and regulation for safety in tunnels. This led to a complete tunnel renovation being planned as the best solution to meet modern requirements of tunnel safety and efficiency.

On 3 July 2017, the two-year renovation and restoration of the Maastunnel began. Work will include concrete replacement, new signal and ventilation systems. Much of the old infrastructure, such as the huge, spectacular cast iron ventilation system, will also be restored and preserved as city monuments.

One major assignment of the project is to renovate the 1m thick concrete floor of the tunnel, which lies 4.9 ft (1.5m) below the roadway. The top layer, with a thickness between 4.7 in (120mm) and 5.9 in (150mm), has to be removed with hydrodemolition and replaced by new concrete, with the existing rebar also being preserved.

Dutch concrete and renovation contractor, Hompert-Renes B.V., chose hydrodemolition as the most viable and efficient demolition method due to the requirement for low levels of noise and dust emissions, and to avoid cracks in the tunnel structure. The hydrodemolition process also cleans the original rebar automatically.

“When it comes to the actual hydrodemolition, the work is quite ordinary since we are just removing concrete from the floor using two standard hydrodemolition robots,” says Jurjen Volmer, owner of his own hydrodemolition company, Volmer Industrial Services, a subcontractor to Hompert-Renes. Volmer has four operators operating the two Conjet 557 hydrodemolition robots around the clock, Sundays to Thursdays. The remaining days are used for removal, cleaning and to refill the sections with new concrete.

While the actual demolition is quite simple with the standard Conjet 557 robot, the logistics of the operation are quite complicated. This is due to having to reach the 94 sections of the tunnel by specially constructed bridges, going forward and back again, and removing the demolished concrete out of the tunnel.

Hydrodemolition has proven to be the best suited way of effectively dealing with the tunnel renovation, and the use of the Conjet robot has certainly made the demolition parts quite straightforward.

The hydrodemolition process started at the beginning of September 2017. Ten weeks later, approximately 550m3of concrete had been removed from the 1,870 ft (570m) long and 22.3 ft (6.8m) wide concrete floor of the tunnel. As soon as the concrete top layer had been removed and the remaining rebar had been cleaned from rust, new concrete was immediately poured in place.