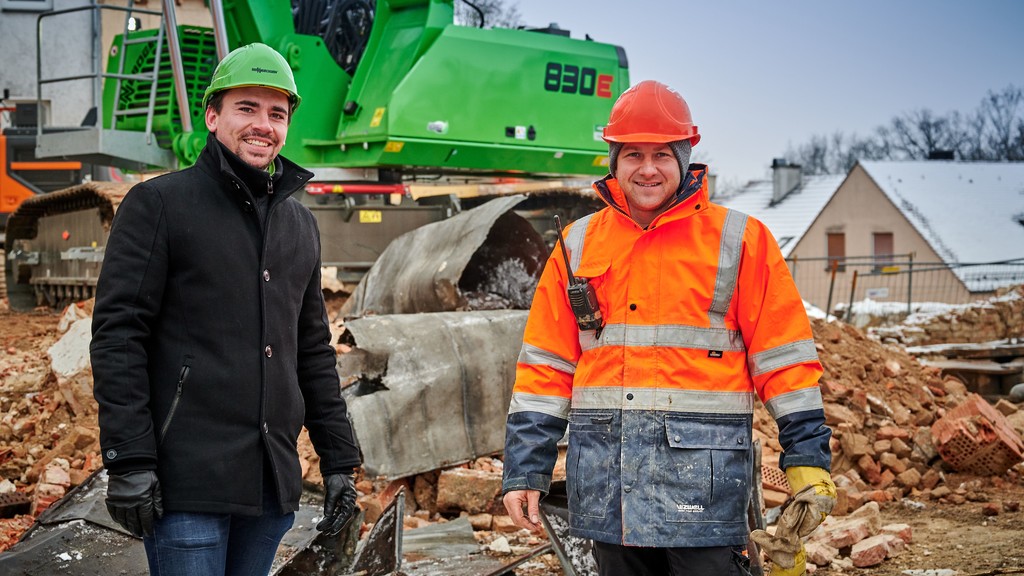 In late April, it was announced that the Bauma construction show in Germany was rescheduled for October 2022. That’s probably the best piece of news the construction industry has heard since the beginning of the pandemic. As the world’s biggest trade show, Bauma is widely expected to have a healing effect on international business. There is no doubt that visitors to the Messe München will be greeted with a veritable deluge of new machines and tools. And there is also little doubt that most of the demolition excavators presented in this feature will be on display in Munich.

Doosan Infracore Europe is about to launch the DX380DM-7, the third model in the company’s new high reach demolition range, joining the existing DX235DM and DX530DM excavators introduced last year. The machine features a high visibility 30o tiltable cab, which is particularly suited to high reach demolition applications. The maximum pin height of the demolition boom on this model is 75.5 ft (23m). The DX380DM-7 retains a hydraulically adjustable undercarriage, which extends to a maximum width of 14.3 ft (4.37m) for enhanced stability. The width of the undercarriage can be retracted for transportation. The adjusting mechanism is based on a permanently lubricated, internal cylinder design, which minimizes resistance during movement and helps prevent damage to components. A modular boom design and hydraulic lock mechanism enhance the machine’s flexibility, and facilitates easy change between demolition and earthmoving booms. A cylinder-based system pushes the locking pins into place to help complete the procedure. When equipped with the digging boom in the straight configuration, the DX380DM-7 can work to a maximum height of 34 ft (10.43m).

When demolition and recycling specialist Brandhuber Transporte GmbH started a major deconstruction project in the historic part of Straubing last December, the company did not have to go far looking for the right equipment, with the Sennebogen’s headquarters located mere blocks from the jobsite. The project involved selective demolition of three buildings over a period of four weeks using a Sennebogen 830 E excavator.

With an engine power of 225 hp (168kW) and 360° operational capability, the 45t machine effortlessly pulled down the four-story former residential buildings one after the other and sorted construction debris into allocated containers right on site. The 4.5m wide telescopic undercarriage, in particular, contributes to the stability of the excavator.

Brandhuber Transporte’s team began the job by grabbing and moving the chimney from a height of 50 ft (15m) to the ground in one piece. The team then disassembled the roof’s remaining elements and loaded bricks, metals, and wood into various containers for subsequent recycling. The machine’s stability and 360° capability were crucial for Brandhuber, because the endless upper carriage rotation eliminates time consuming repositioning maneuvers.

Fitted with a 23-ft (7m) long straight boom and a purpose made arm, the new Volvo EC380E model does away with the traditional “boom and stick” approach of excavators. The extra-long straight boom provides significant height and reach advantages over conventional machines. The cab is protected against falling debris by a frame mounted falling objects guard. The roof and one-piece front windows are made from P5A glass, resistant to high impacts. Night visibility is aided by standard LED lights on both the boom and platform, with additional light options available for the cab and counterweight.

The machine also comes with quick-fit and oil drain line and water lines that are connected to a dust suppression system consisting of an 8 gpm (30 lpm) lifting pump that feeds water into four arm-based nozzles, creating a fine mist. In the system’s auto mode, water is only sprayed when the attachment is operating.

Designed to deal with high impact materials and demanding terrains, the Volvo EC380E straight boom has a solid main frame made of heavy-duty plate steel with bolt-head protection, and extra plating to safeguard undercover areas and tracks. The EC380E straight boom excavator comes with a choice of cab entrances consisting of either a fixed cab entrance and thicker side impact protection system (SIPS), or a foldable cab entrance with narrow SIPS for easier transport. According to the manufacturer, the range will shortly be expanded with the addition of a 30t class EC300E straight boom excavator boasting the same features and benefits.

Purpose made for the demolition of tall structures, the new Cat 340 UHD excavator boasts 13% higher pin than the forerunning 340F UHD model, allowing it to reach up to eight story buildings. The machine’s coupling system permits switching between two UHD fronts and retrofit booms and sticks with no special tools in 15 minutes.

The Cat ‘Payload’ system provides on the go weighing and real time estimates of the payload, so operators can achieve precise load targets when working with the single piece retrofit boom. The excavator is powered by a 311-hp (232kW) Cat C9.3B engine running on either diesel or biodiesel fuel. The 340 UHD features a 30o tiltable cab for efficient and comfortable demolition of tall buildings. For better visibility of the attachment at height, a UHD front with work tool camera is provided. The cab is equipped with FOGS P5A laminated glass for safety. Standard rear view and side view camera enhances visibility of the operating area.

Following a program of extensive testing, the JCB 220X crawler excavator is now available in the XD demolition specification. Certified to FOPS Level 2, a protection cage shields the driver from falling material. All JCB XD excavators feature a side impact protection system (SIPS) designed to protect the fuel and hydraulic tanks, cooling pack and the hydraulic pump bags and is fitted down both sides of the machine’s upper structure.

Underbelly protection has been improved with an increase in thickness to .4 in (10mm) to guard vital machine components on the upper and lower structure. For attachment handling, JCB offers the option of Advanced Tool Select—a display for operators to set up 10 attachments with desired flow and relief pressure.

The upper structure is now nearly 9 ft (2.7m) wider, and 8 in (200mm) broader, with the additional space to mount the main boom in the center of the machine, rather than at an offset. This reduces stress on the slew bearing, provides increased accuracy for the operator when trenching, and permits use of larger buckets without impacting the tracks. Though the boom and arm are unchanged, JCB will offer the option of boom float with two modes to make grading easier and to reduce stress when operating a hydraulic breaker.

Komatsu rolls out a “whale” of an excavator

Komatsu Europe has announced the introduction of the new PC2000-11 hydraulic excavator. Weighing in at a whopping 202t, this giant boasts an innovative engine pump control system that optimizes hydraulic flow for extra-fast cycle times. Ideal for loading 60t to 150t rigid frame haul trucks, the PC2000-11 is also an excellent tool for stripping overburden and loading coal and shot rock. It has a simplified power module (cooling package, engine, PTO, and hydraulic pumps) that provides easy access to all major components, lowers noise levels in the cab, and reduces labor hours when time comes for a planned overhaul.

Komatsu’s proven after treatment system allows the PC2000-11 to meet the EU Stage V regulations without the need for Adblue. Offering an increase in productivity of up to 12%, the PC2000-11 can load more trucks per shift. The excavator is equipped with selectable working modes to tailor the performance to different applications, including the new Power Plus mode. Customers can expect extended component life on the PC2000-11 thanks to thicker, stronger boom plates and castings; strengthened track and center frames; larger diameter carrier rollers; and improved hydraulic cylinder seals that enable the PC2000-11 to withstand the most abrasive applications.

In February, the German demolition company AWR Abbruch GmbH received the key to its new R 980 demolition excavator in an official handover ceremony at Liebherr’s plant in the French city of Colmar. The ceremony took place in the presence of Liebherr-France’s senior management and Mrs Brigitte Klinkert, the French Minister of Labor, Employment, Vocational Training, and Social Dialogue. The largest Liebherr demolition excavator so far, the R 980 was designed and manufactured by Liebherr-France SAS in close cooperation with the German contractor that already owns a number of Liebherr demolishers, general purpose excavators and wheel loaders. With an operating weight of 190t and a counterweight of 35t, the R 980 comes with four boom options measuring from 59ft to 180 ft (21m to 55m) respectively to handle a variety of attachments.

Kobelco Construction Machinery Europe B.V has announced the launch of its largest short radius (SR) model in the 38t segment. Weighing in at more than 36t, the SK380SRLC is driven by a 200kW Stage V-compliant turbo charged Hino diesel engine with a Power Boost feature. The machine’s powertrain generates a drawbar force of 70,590 lbf (314kN) for smooth and steady operation across rough terrains and slopes. In addition, the combination of high hydraulic pressure and balanced chassis layout delivers a lifting capacity of 27,315 lb (12,390kg), even when digging at a reach of 20 ft (6m).

Additional safety is provided by three standard cameras located on the left, right and at the rear of the machine. A two-piece boom option is expected to be introduced later this year to further enhance the machine’s usability in confined spaces. 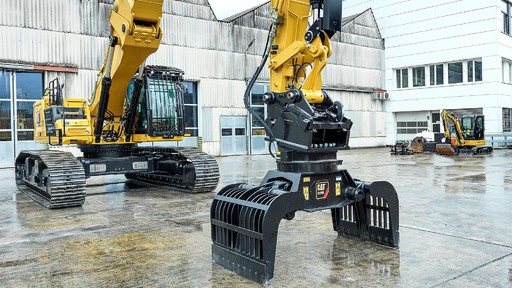 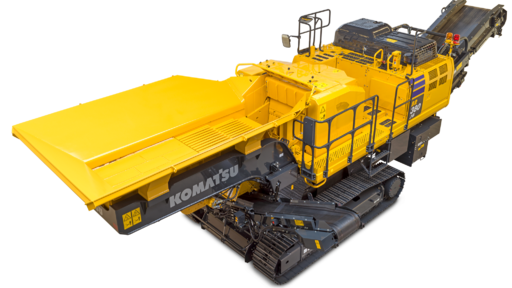 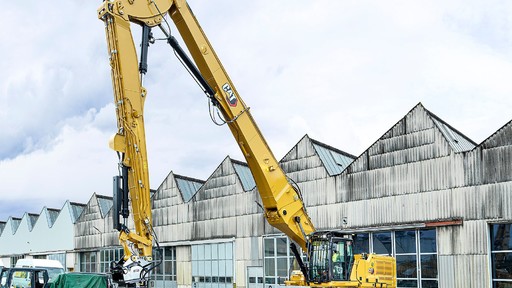 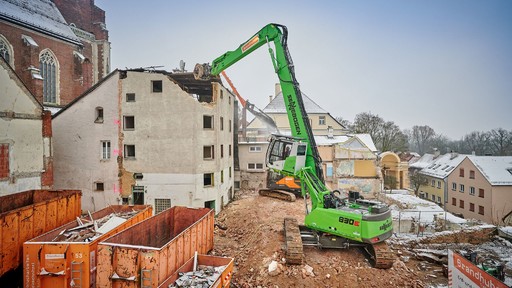 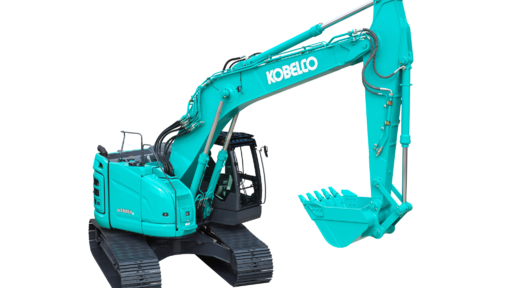 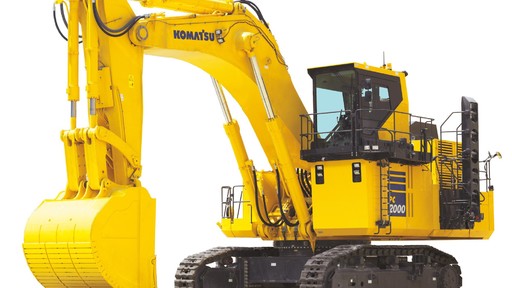 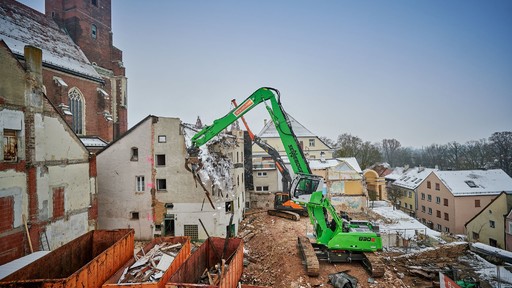 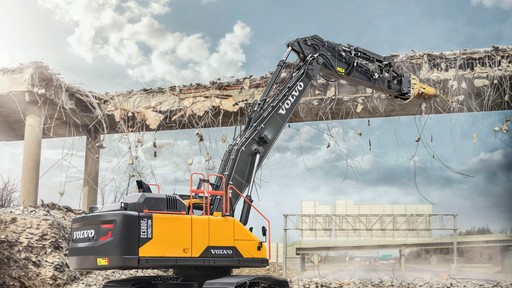 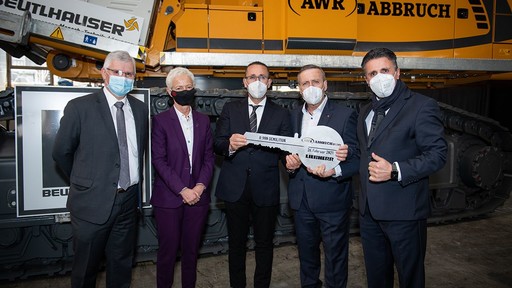 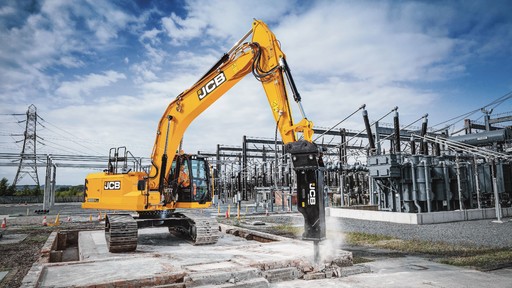 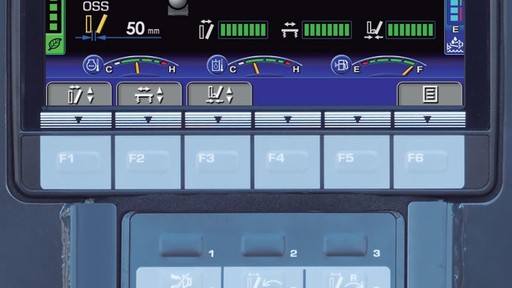 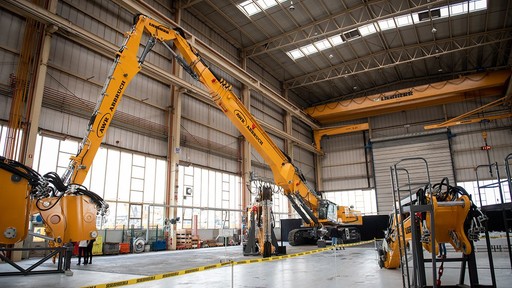 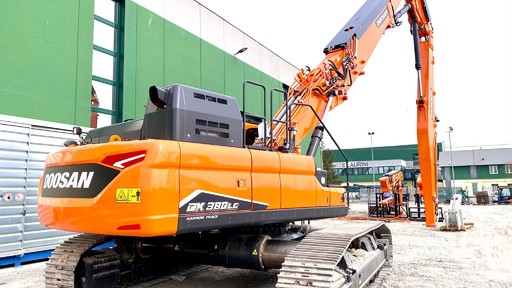