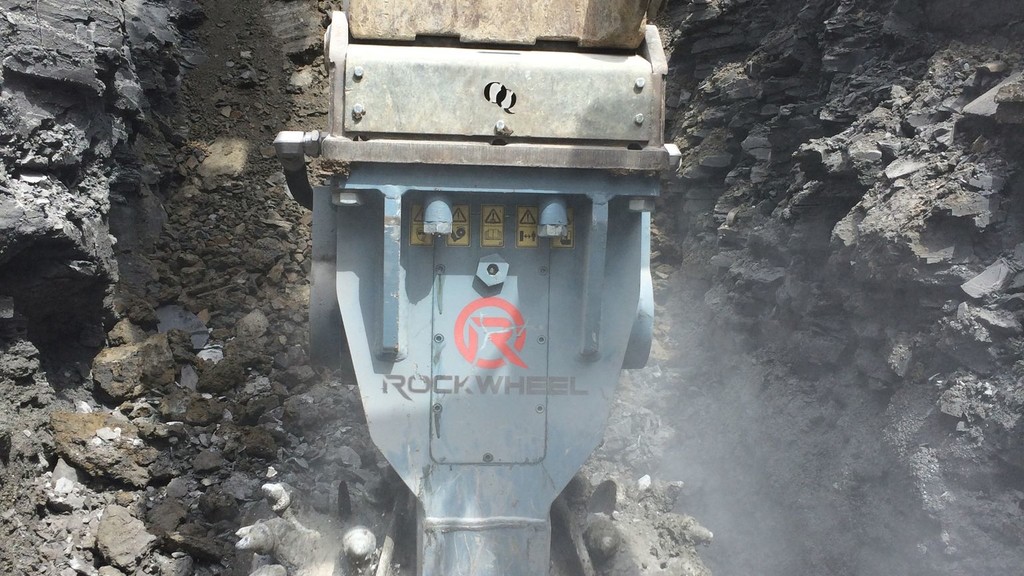 A DRUM ROLL FOR DRUM CUTTERS!

A relative newcomer on the demolition scene, rotary drum cutter is probably the most universal excavator attachment there is. Demolition, quarrying, tunneling, landscaping, underwater cutting, and pipeline construction – that’s an incomplete list of tasks that rotary drum cutters are capable of handling. Jumping on the trend, many attachment suppliers have enhanced their arsenals with this spiky multitasker.

The Epiroc Group entered the drum cutter market in 2017 by acquiring Erkat, one of the companies that pioneered the drum cutting technology back in the late 1990s. In March, Epiroc introduced HATCON, a remote monitoring device for hydraulic breakers and drum cutters that keeps track of the attachments’ location and operating hours.

It is connected to the cloud-based “My Epiroc” platform, which gives notifications on maintenance, creates task lists and provides an overview of the entire fleet. HATCON is available as both factory-mounted and a retrofit kit for Epiroc and Erkat drum cutters.

Also new from Epiroc this year is the “Pro” bracket for transverse drum cutters. This fixed-bracket improves the protection level of the hoses when working in confined and limited visibility areas without compromising the quality and performance. The bracket ensures better hose guidance, which results in less mechanical strain and enhanced protection on sites with reduced visibility (tunnels, underwater). The rugged closed-box design prevents the demolished material from falling on to the engine cover.

The “Pro” bracket comes with an optional water spraying system for dust control during demolition, tunnel and canal construction. Depending on the application at hand, the customer now has the option to choose between a rotating or static support bracket.

Drum cutters from Italy-based MB Crusher has been recently used to great success on a few infrastructure projects in Europe. When the historic Augustusbrücke bridge over the Elbe river in Dresden came due for renovation, the contractor sought an attachment that that would not cause any damage to the 18th century structure and would fit the machine already onsite - a Liebherr 918 excavator.

MB Crusher specialists recommended an MB-R800 drum cutter, suitable for 10-22t excavators. The first and most challenging phase of the project was freeing up the expansion joints by applying the drum cutter to the bridge’s diagonal cement lines. Next, the MB-R800 was used to remove some of the concrete that filled the bridge arches, grinding as far as 10 ft (3m) deep.

Another German project called for the demolition of an old bridge over the busy AVUS motorway in Berlin. The challenge was to allow the traffic to continue moving on the carriageways across the bridge. Following the first phase executed by heavy-duty demolition machinery, the two drum cutters - a MB-R800 and a MB-R900 were called in to remove the layers of cement and tarmac.

Another case study, this time in Corsica, involved the construction of a 1,476-ft (450m) suspended footbridge 16 ft (5m) above sea level. Located on a narrow cliff between the sea and the land with very little room for maneuver, the construction site itself represented the biggest challenge. MB Crusher solved it by advising the customer to use a combination of a Bobcat E85 excavator with a MB-R500 drum cutter with a rotation kit.

In Witzeeze, Germany, a contractor was tasked to remove concrete walls of a bridge and some underwater boulders to widen the riverbed. A MB-R700 unit passed the test with flying colors.

Last year was very successful year for Italy-based Simex. The manufacturer strengthened its sales network, developed new attachments and, most importantly, added a new 80,700-ft2 (7,500m2) building to its flagship manufacturing facility near Bologna. A warehouse with high storage capacity, it allows the Italian company to improve delivery times and to respond to the market requirements in a more efficient manner.

At the Italian Samoter trade show in March, 2021, Simex will display the new TFC 400 and TFC 600 double-drum cutters. Designed for 6-10t and 9-12t excavators respectively, the continuous rotation cutters ensure smooth and even milling. With a cutting force of 4,159 lbf (18.5kN), the TFC 400 is ideal for small-sized excavation tasks, profiling of concrete surfaces and landscaping. The more powerful TFC 600, boasting a cutting force of 5,508 lbf (24.5kN), is designed for more heavy-duty applications like milling off of deteriorated concrete structures in walls and tunnel roofs, profiling of cut-off walls, trenching and laying of aqueduct and sewer pipes. The TFC 400 has been recognized with the Samoter 2020 International Innovation Award in the Attachments category.

Germany-based Rokla, one of the pioneers and trendsetters in the drum cutter industry, that markets its products under the Rockwheel brand, has focused on pick layout to achieve rapid precise and smooth cutting. The manufacturer explains that an optimal layout of picks on the drums results in less stalling of the cutter head, more continuous cutting and ultimately higher performance. For cutting exceptionally hard materials, a special demolition drum is recommended. It features a helical depth limiter to prevent over-cutting and reduce vibrations.

Another trademark feature of Rockwheel drum cutters is that they need only two hydraulic connections, with no drain line required. The special valve construction serves to protect the hydraulic motor. The attachments’ compact design reduces stress on the excavator boom and ensures operational stability.

Kinshofer Group, a Germany-based heavy hitter in crane and excavator attachments, is currently in the process of rebranding its range of drum cutters, formerly known as the WS series. From now on, every cutter in the nine-model range will have the code name KDC with the number at the end denoting the maximum operating weight of carrier it fits. Driven by high-torque motors, the KDC cutters feature modular construction and robust spur gearing with a gear reduction to increase the cutting force. The attachments are suited for underwater operation of up to 82-ft (25m) deep thanks to the heavy-duty sealing system. The hydraulic motor can be adjusted to the excavator’s hydraulic circuit capacity. Quick and easy exchange of wear parts reduces downtime. The optional 360-degree rotation function allows exact positioning in corners, on walls and other vertical surfaces for more accurate contouring. The optimized arrangement of picks ensures a high loosening performance and low wear. Three-drum versions are available: the excavating version for cutting soft to medium hard rock, the profiling version for shaping and levelling soft to medium hard rock, and the demolition version for cutting medium-hard to hard rocks and concrete.

Four pick variants allow users to achieve optimum performance on different materials. The standard pick is recommended for soft to medium hard rocks such as argillite and asphalt, while heavy-duty pick is designed for medium-hard to very hard rocks. The wear-protected pick works best for highly abrasive rocks like sandstone and furnace gravel, and the wood pick is ideal for stumping and landscaping applications. 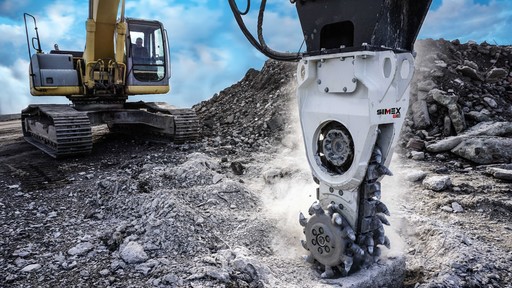 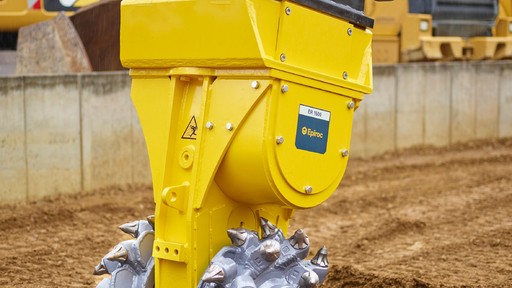 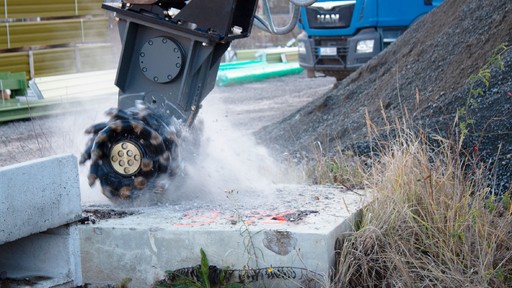 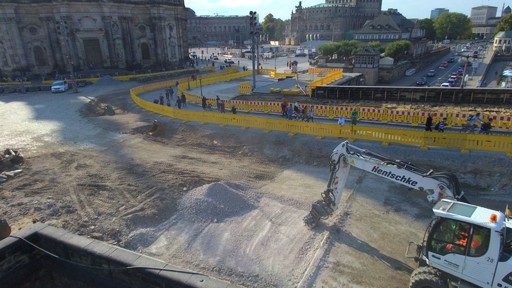 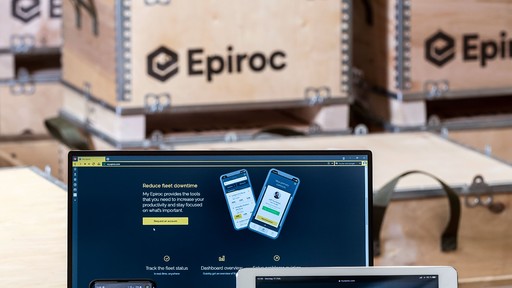